If you’re confused about what the Stardew Valley Favorite Thing on the character creation screen means and what entry you should fill for it, look no further. Let’s talk about this secret element in the game.

What Is The Stardew Valley Favorite Thing?

SDV is a farming simulator in which you begin a new life on a farm inherited from your deceased grandfather. The site of your fresh beginning is a quaint rural area called Stardew Valley.

The game, created by Eric “ConcernedApe” Barone, enjoys great critical and commercial acclaim, and has sold more than 20 million copies as of 2022.

When you create your character at the start of a new game in Stardew Valley, you are asked to fill in different options to customize your player.

An exhaustive list of the various choices available to you includes:

Note: Most of the values you put in are only cosmetic and do not affect your gameplay. However, the pet you pick determines the animal you get as a companion in the game.

The weird last entry on the list confuses many gamers. What I am supposed to fill in here? What is its purpose? Will it affect the gameplay? Will it even ever make an appearance in the game again?

Well, the good news is that the Stardew Valley Favorite Thing does not affect your game-play. So you can relax in case you already started the game and entered a random word in the field without thinking too much about it.

Favorite Thing makes its presence felt as a funny dialogue whenever you eat a special food item called the Stardrop (previously dubbed as the Cosmic Fruit). Now the latter is very important in the game.

What Is A Stardrop? How Does The Favorite Thing Relate To It?

A Stardrop is a special food item that increases your character’s max energy by 34 points.

You can get a Stardrop in many ways in the game –

You can’t save a stardrop in your inventory in the latest version of the game and need to consume it as soon as you get one. In fact, you could only save it prior to version 1.3.27 of SDV.

Eating a Stardrop reminds you of the Stardew Valley Favorite Thing by embedding the value you entered into a unique message.

For example, if you had entered “Roses” in the Favorite Thing field on the character creation screen, you will see the following message:

“You found a stardrop! It’s strange, but the taste reminds you of Roses. Your maximum energy level has increased.”

It turns out that what you put in as your favorite thing does matter in the game, if only to make you smile.

Suppose you filled “ConcernedApe” (the assumed moniker of the game’s sole creator, Eric Barone). In this case, the following unique dialogue greets you:

Such a message saluting the game’s tireless creator is very apt. Barone single-handedly developed Stardew Valley as a labor of love over four years – he handled everything himself, from the story and dialogues to the sound effects to the game’s art.

If you filled in the word “Stardew”, you will see the following message: Please note the capital “S” in “Stardew”, and “C” and “A” in “ConcernedApe” that you need to type in to activate the secret Easter Egg.

Stardrops are the only way to increase your energy permanently in SDV. You start with an energy level of 270. There are seven stardrops you can earn for a maximum energy bar of 508 ([7 x 34] + 270).

Other Fun Secrets in Stardew Valley

Stardew Valley lets you escape the busy pace of city life to relish the peace of working on a farm. As such, fun and the joy of community are the central themes of this game.

In line with this philosophy, Barone tried to pack in many interesting elements. He has announced that Easter Eggs are a vital component of the game.

These weird but funny gems along with unexpected NPC reactions bring much lightheartedness to SDV. Some of the game’s best secrets are mentioned below: 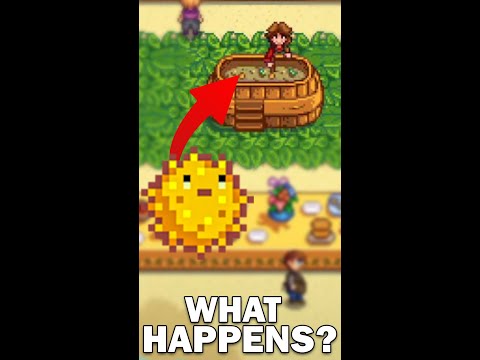 What happens if you put an unsavory ingredient like a poisonous puffer-fish in the Community potluck? Well, the Governor will turn green and pass out after tasting it and Mayor Lewis will be very, very angry with you.

Alien In The Doorway

After the SDV start screen has loaded, repeatedly clicking on the leaves summons the Junimos. You’ve probably found that out already. Now try poking continuously at the “E” in “Stardew”.

It transforms into a doorway and an alien creature dressed in green pants, white boots and a belt shows up. Don’t be afraid; he’s throwing up peace signs. Is this a clue regarding the Strange Capsule? Who knows.

The Lonely Stone can be found in a specific location on the Stardew Valley map. If you click on the Lonely Stone, you will be surprised by a special sound effect while your map screen will collapse entirely at the same time.

The Lucky Purple Shorts worn by Mayor Lewis have several secrets related to them, but when you trim them, you get the most hilarious one.

Secrets In The In-Game Menus

You can also unveil delightful little quirks hidden in the game’s various menus. For example, you can see rare animations around the menu on the Shipping screen.

With that, we complete our Stardew Valley Favorite Thing guide. As you saw, it is not something that affects the gameplay, but it is a funny and cool addition to the game.