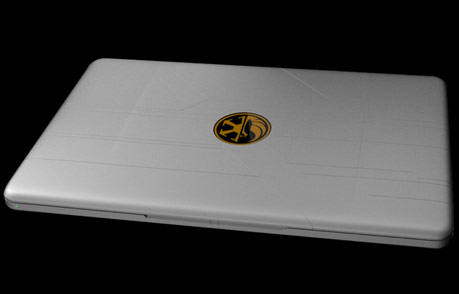 The Star Wars Razer Blade laptop is the latest addition to the company’s SWTOR series of gaming products and this one has an estimated price of over $15,000. Well, interested buyers won’t have to shell out a heap of cash for the notebook as the company states that only one of its kind exists and the only way to score the unit is through a sweepstake promotion where a lucky winner will take home this grand prize.

The Star Wars-branding aside, what makes this gaming rig so ‘unique’ is the custom design adopted by the company. In collaboration with LucasArts and BioWare, Razer has reworked the laptop’s appearance from the ground up. The exterior features laser etched, matte painted aluminum panels and a yellow backlit keyboard. Complementing these components is the official font and iconography from the SWTOR MMO title. The new visual enhancements haven’t taken a toll on the sleek and lightweight profile the latest iteration has to offer. The notebook measures 0.88 inches in thickness and weighs less than seven pounds.

Since nothing has changed on the inside, we’re going to quickly run-through the main components employed here. On the top of the specifications sheet is a dual core Intel Core i7 processor clocked at 2.8GHz. Accompanying the CPU is 8GB of dual channel DDR3 RAM and an Nvidia GeForce GTX 660M GPU with 2GB of dedicated DDR5 memory. Visuals are delivered through a 17.3-inch FHD LED-backlit display with multi-touch input. 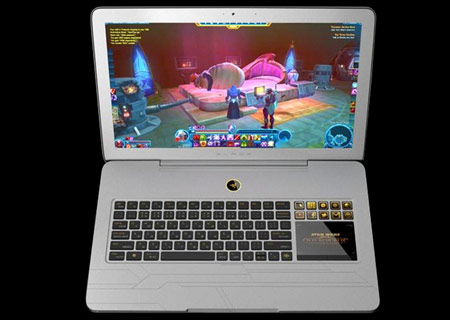 Fans and those wanting to partake in the sweepstakes can head over to razerzone.com/WieldTheForce and fill in the necessary details. As stated earlier, the first prize is the Star Wars Razer Blade laptop, while the runner-up will be awarded with various Star Wars: The Old Republic peripherals which comprise of a gaming keyboard, mouse, mouse pad and headset.