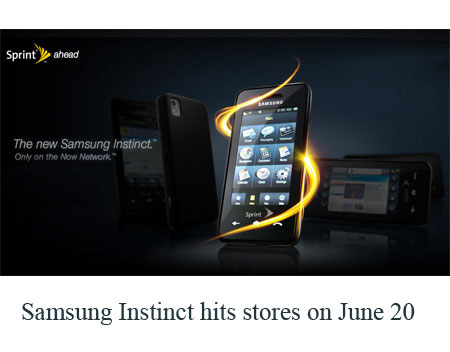 The magic of the human touch will once again be explored to its maximum with the launch of Samsung’s SCH-M800 Instinct touchscreen phone, which has now been officially dated for a Friday, June 20 release. Exclusively available via Sprint’s network, the Instinct has been cited as a strong competitor to Apple’ iPhone.

Already conferred with laurels such as being the recipient of the Best in Show and Mobile CE Smartphone award at CTIA Wireless 2008 and Best Cell Phone CTIA from CNET, the sleek touchscreen handset is one device that Apple needs to surely watch out for, not in the positive sense of course!

Coming to its features and specs, Samsung’s device sports a 3.1-inch TFT LCD 240×432 touchscreen. One area where the Instinct already seems to be a winner over the iPhone is in the camera section. Unlike the existing iPhone, the Instinct’s 2MP camera has the ability to also record and stream videos. The CDMA EV-DO Rev A (800 MHz/1900MHz) phone has a 2GB MicroSD memory card that can be upgraded to up to 8GB. Furthermore, the Apple killer bundles two standard lithium-ion batteries, each capable of delivering up to 5.75 hours of continuous talk time. Measuring 4.57″ x 2.17″ x 0.49″ and weighing 4.4 ounces, the Instinct additionally incorporates Bluetooth 2.0, audible caller ID, voice dialing and commands, a full HTML Web browser, a digital music player that shows album art, support for Sprint Radio and Sprint TV, phone as modem capability, Microsoft Live Search, and integrated GPS with Sprint navigation. Furthermore, the Instinct is Sprint’s first EV-DO Rev A consumer-centric device.

And the features don’t end there. Samsung’s forthcoming Instinct includes GPS that will instantaneously point out hotels, ATMs, restaurants and a range of other services based on the user’s location. It is also Live TV capable enabling users to watch TV wherever they manage to find a signal.

Though the availability date has been detailed, as of now there’s no info either about the price of the product or the specific regions where it would be rolled out. But it does seem that most probably it won’t experience a worldwide launch on June 20. However, what’s known is that the Samsung Instinct would have to be activated on an Everything plan, which begins at $69.99. Existing Sprint subscribers can move to an Everything plan without extending their contracts.