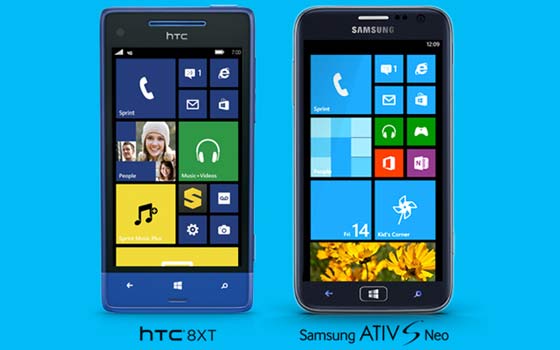 Sprint has finally signed up for Windows Phone 8 devices and the Samsung Ativ S Neo is going to be amongst the first to go live through the carrier. The Samsung phone isn’t the only one being announced today with an official price, as the HTC 8XT has also been unveiled featuring Booms Sound speakers that are currently available only in the Taiwanese manufacturer’s Android portfolio.

The Samsung Ativ S Neo is as anyone would predict, a carrier specific variant of the original WP8 smartphone which has been available in Europe for many months now. Unlike Verizon’s Odyssey version which touts mid-range specifications, the one in question will carry an enhanced set of hardware which are almost at par with the latter.

To sum everything up in a nutshell, the Sprint Samsung Ativ S Neo is powered by a 1.4GHz dual core processor and it’s bundled with 1GB of RAM and a microSD card slot, which we’re assuming supports up to 64GB. The front dons a 4.8-inch HD touchscreen and a 1.9MP camera, while the rear sports an 8MP snapper with LED flash. Other highlights include international roaming, Wi-Fi, NFC and a 2,000mAh Li-ion removable battery.

Where the Windows Phone 8 platform on the Samsung Ativ S Neo is concerned, the handset will be no different from the rest of the flock running Microsoft’s mobile OS. That basically means buyers will be presented with Live Tiles that can be arrange and resized on the Start screen, People Hub for accessing contacts and even checking up on friends, Kid’s Corner which is designed to keep data safe from the young ones and SkyDrive for cloud storage.

The Samsung Ativ S Neo will be available for a price of $149.99 after a $50 mail-in rebate. Customers will also have to sign up for a new two-year service agreement and opt for one of the carrier’s Truly Unlimited 4G LTE plans. A release date for the smartphone is yet to be disclosed.