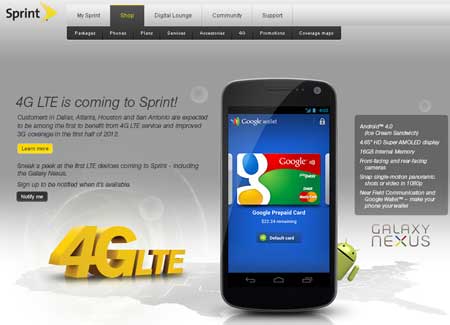 The 4G LTE Samsung Galaxy Nexus and LG Viper will be seen coming through Sprint though the availability details are not clear. The Galaxy Nexus with its Ice Cream Sandwich OS and the Gingerbread-running LG Viper should be seen bringing in specs that cater to a wide audience. Besides the two aforementioned smartphones, the Sierra Wireless Tri-Network Hotspot will also be arriving on the network.

The Samsung Galaxy Nexus on Sprint’s 4G LTE network, is coming with Google Wallet to make transitions a breeze for potential users. It dons a 4.65-inch HD Super AMOLED display and possesses 16GB of internal storage. The upcoming offering houses a 1.3MP front-facing camera and embeds a 5MP snapper on its rear panel. It also brings Wi-Fi, Bluetooth and NFC connectivity amongst other features.

“The first three products that will run on the Sprint 4G LTE network exemplify the cutting-edge technology our customers can expect from Sprint as we progress with our 4G LTE rollout,” states Steve Elfman, president of Network, Wholesale and Product Development for Sprint. “Galaxy Nexus packs industry-leading features and the best of Google into a beautiful design while LG Viper 4G LTE continues Sprint’s commitment to green devices that don’t sacrifice speed or technology. These products combine with our unlimited data pricing plans to give Sprint customers a powerful wireless experience.” 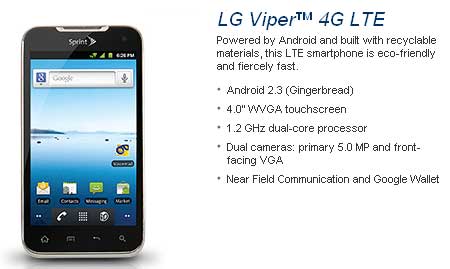 Besides delivering 4G LTE capabilities, the LG Viper brings Google Wallet and NFC connectivity with other attributes for prospective users out there. It wraps in a 4-inch WVGA touchscreen and comes powered by a 1.2GHz dual core processor. Ardent mobile photographers can indulge in the primary 5MP camera or can snap up self-portraits with the front-facing VGA camera.

The Sprint 4G LTE Samsung Galaxy Nexus and LG Viper release date and price details are currently under wraps, but subscribers and prospective users can be on the watch out for further updates on the same.