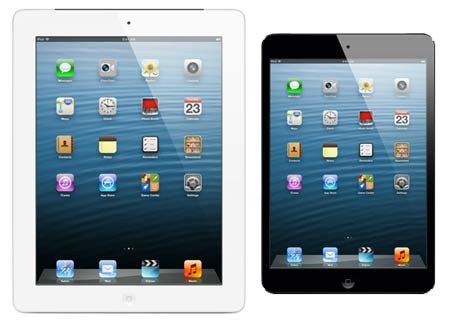 The day is finally here, with the cellular versions of the iPad mini and the fourth generation iPad being available for purchase through select Sprint stores in the US. The Wi-Fi only variants of both tablets have already gone up for grabs online and though retail outlets since earlier this month.

The latest additions to Apple’s tablet lineup were announced last month with pre-orders taking flight around a week later. While rumors indicated that the company was working on a smaller version of its 9.7-inch slate, all surprises weren’t spoiled as a fourth generation iPad was announced as well. This device packs in the same set of features as its predecessor. However, it does boast of a new processor, the A6X, which is an upgraded version of the iPhone 5’s A6 SOC. This version also houses the Lightning connector. 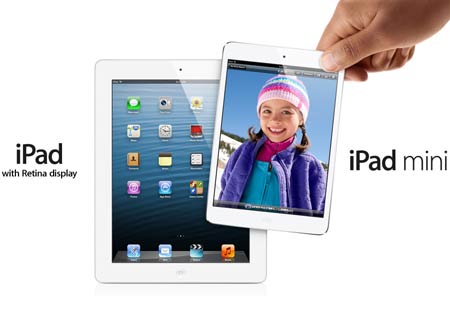 The iPad mini, as its name suggests, is a compact version of its large sibling. This slate packs in a 7-inch LED-backlit HD display powered by a dual core Apple A5 chip. The front sports a FaceTime HD camera, while the rear is equipped with a 5MP iSight snapper with 1080p HD video recording. Users can expected up to 10 hours of battery life on a single charge. Purchasing any one of these tablets from Sprint doesn’t require buyers to sign up for an annual contract agreement with the carrier.

The iPad mini cellular model price starts at $459.99 for the 16GB option, while the 32GB and 64GB choices are available for $559.99 and $659.99, respectively. For the 4G LTE fourth generation iPad with Retina display, potential buyers will have to shell out $629.99 for the 16GB variant, $729.99 for the 32GB version or $829.99 for the 64GB device. Apart from Sprint, both tablets are up for grabs from AT&T and Verizon through the Apple online store and the carriers’ outlets. These slates are also scheduled to go live through EE in the UK. 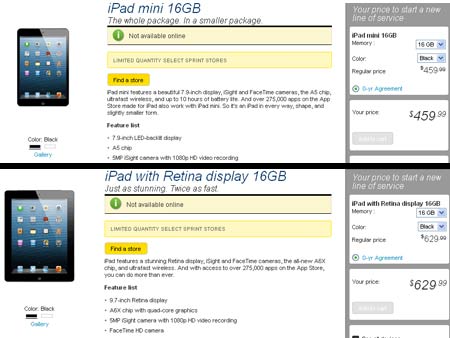