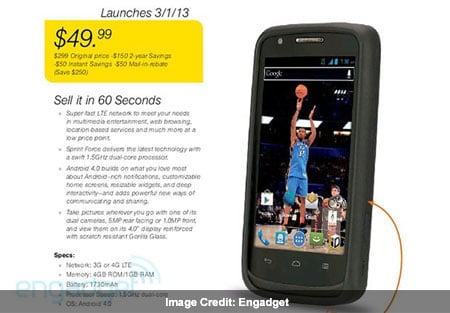 The Sprint Force release date has become known as information regarding the LTE handset has leaked, and it is apparently scheduled for an early March arrival on the carrier’s high-speed network at a price of just $50. The Android phone is not the first to land on the mobile operator’s 4G network, but it definitely seems like one of the most low-end offerings.

The handset looks like it could be the rumored ZTE handset of the same name, Engadget reports. Apparently, a tipster sent one of the members of the web site’s staff an image of the carrier’s product page. Thankfully, this image comes with a few details regarding the device’s specs, as information is scarce at the moment.

For starters, it should run on the Android 4.0 (Ice Cream Sandwich) platform, which is a bit old now. Jelly Bean is becoming the new standard and every high-end device comes with it. Even some mid-range phones and tablets are starting to embrace the latest Google mobile platform. Internal storage capacity is also relatively limited at 4GB, but a 1.5GHz dual core processor should make it considerably fast.

At this stage, there is no information on expandable memory options, but what is known is that the gadget will have 1GB of RAM, and doesn’t do so badly in that respect. There will be dual cameras with the one on the back capable of capturing images at a 5MP resolution. The 1MP front-facing webcam should fit in with video calling. There will also be Gorilla Glass protecting the 4 inches of screen real estate.

Speaking of 4-inch displays, the last phone we heard was coming to this side of Sprint’s services was the Kyocera Torque. When it is launched, it will bring along ICS as an operating platform and a number of rugged features such as dust and water resistance. In addition, it will conform to 810G military standards and be PTT capable. Just recently the company announced that it was in the process of bringing the newly revealed HTC One to its Truly Unlimited plan, giving its customers something more to chose from in terms of high-end options.