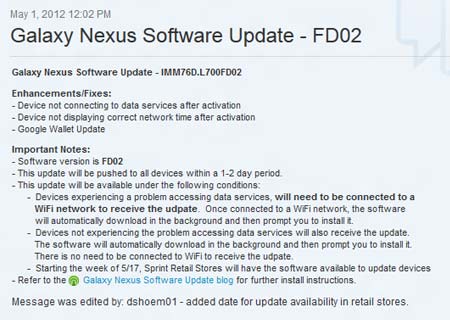 For those who picked up a ‘faulty’ pure Google phone from a certain US carrier, the Sprint Galaxy Nexus software update seems to be a viable solution for resolving the data issues. The release is scheduled to roll out through an OTA delivery method to all smartphones.

Not long after the device in question made its debut through the network carrier, users seemed to have started experiencing issues over connecting to data services. The main purpose of this update is to enable access to 3G and 4G networks. Besides a data fix, it even packs in unspecified improvements to the Google Wallet service.

The procedure to obtain the update seems quite intuitive. The software should automatically download onto the smartphone when within range of a Wi-Fi network. The company states that users will receive the option to install the update at the very moment or schedule it for a later time. They can even download the release manually through the System Updates tab under the device’s settings menu. On following the on-screen instructions, the expected time required for the process to complete is most likely to be between 5 to 20 minutes based on network and connection speed.

The Sprint Galaxy Nexus software update is expected to arrive in stages over a 10- to 21-day period. Since network data access isn’t available to affected users, the carrier recommends them to download the release over a Wi-Fi connection as it will only be available over the air. The release should also be available through Sprint retail stores starting May 17.