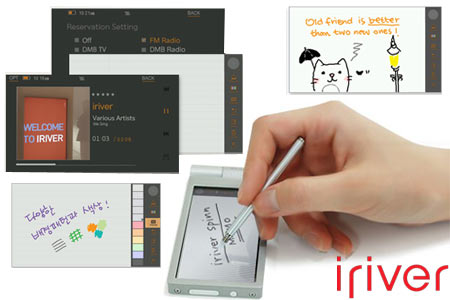 Launched last year, iRiver’s innovative PMP Spinn has managed to create quite some followers. The player is known to have certain software and storage capacity issues. Yet for those who do love the gadget, iRiver has recently released the 2.0 firmware. Bringing in many updates to the player, the novel 2.0 firmware is certainly meant to enhance the functionality of the player.

According to Slashgear the firmware is packed with many new features. Taking complete advantage of the restive touch display of the Spinn, the 2.0 firmware will now allow users to take memos or draw with the stylus through the Memo function. The firmware is bundled with the Big Album Art feature that will give a much better view to a user’s albums.

The firmware has also enhanced the support for pictures by adding some new picture management tools and the FW that comes with the auto rotate attribute and takes care of other picture files. With support from the new Reservation feature, users can now auto record DMB/DAB/FM Radio.

The firmware has also improved the video and game support of the PMP. While the video feature offers extended video playback options, the game feature addition will allow users to download new games through the iAMOLED website. In addition to this, Spinn’s 2.0 firmware also includes advanced searching tools.

The 2.0 firmware is a 3.9 MB file and is available for download now, but only from iRiver’s Korean site.