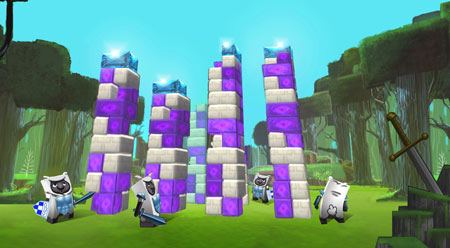 A while ago, we had reported that American film director Steven Spielberg was working with Electronic Arts to develop games for the Nintendo Wii. Now, one of the games has finally been announced. Known as BOOM BLOX, this high-energy game offers Wii gamers a chance to express their creativity and more.

BOOM BLOX includes over 300 levels, a cast of over 30 crazy characters and a user-friendly in-game editor that enables players to bring out their creative sides.

More importantly, the game takes advantage of the Wii’s interactive motion-sensitive controls. They can interact with entertaining characters such as the block-laying chickens or baseball-throwing monkeys across four themed environments – Tiki, Medieval, Frontier, and Haunted.

Further, players can remix any level of the game in Create Mode using props, blocks, or characters that have been unlocked during the game. Players can also virtually build anything they can dream up. Plus, their designs can then be shared with friends or used to challenge others to solve their newly created puzzle via WiiConnect24.

Here is what Steven Spielberg had to say, “I am a gamer myself, and I really wanted to create a video game that I could play with my kids. BOOM BLOX features an enormous amount of fun challenges and cool scenarios for your kids to solve or for you to master together.”

“We developed BOOM BLOX with endless combinations of gameplay in mind. With over three hundred levels, built upon a full real-time physics model, your experience can be as easy or difficult as you want it to be – there really is something for everyone to enjoy,” explains Louis Castle, executive producer.

“My inspiration for this game came while I was playing the Wii for the first time. From the initial concept to what the game is today, it’s always been built around the innovations the Wii brings to playing games. BOOM BLOX plays on the enjoyment of building and knocking down blocks, something that can appeal innately to kids and adults of all ages,” added Spielberg.

BOOM BLOX was developed at the EA Los Angeles Studio. The game will release for the Nintendo Wii in May 2008.