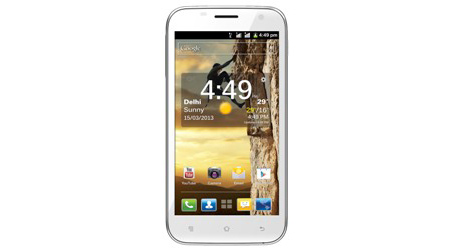 There’s yet another budget smartphone on the horizon in the form of the Spice Stellar Prime Mi-510 which has been spotted on its maker’s official website without a price tag affixed to it. But patrons may not worry, as by the looks of the specifications, it looks like its retail value will be hovering below the Rs 15,000 mark. This new handset bears a 5-inch screen just like that of the Spice Coolpad Mi-515 which we witnessed online yesterday.

In fact, the Spice Stellar Prime Mi-510 shares a number of its specifications with the Coolpad device. For starters, both come equipped with 5-inch screens, but the display on the phone in question features an FWVGA resolution of 854 x 480 pixels. A 1.2GHz quad core processor lies at the heart of the two devices, whereas 4GB worth of internal storage, supported by a microSD card slot, also makes its way onto both the handsets.

Android 4.2 Jelly Bean is the OS of choice here, and the company has also decided to pre-load the Spice Stellar Prime Mi-510 with Netqin Antivirus. As far as the camera setup is concerned, we have an 8MP AF shooter resting on its rear surface alongside a flash. On the other hand, its front boasts of a 3.2MP snapper which is aimed at video calling.

The Spice Stellar Prime Mi-510 is a dual SIM smartphone with support for 3G on both the slots. It features 512MB worth of RAM which is less than that of the Coolpad Mi-515. A 2100 mAh battery also makes its way into the package, but it’s not clear at the moment how much operation time will be able to proffer.

Now that the Stellar Prime Mi-510 has landed on the company’s website, we can expect an official announcement soon. What remains to be seen however is the price tag that its maker will be granting the handset in order for it to compete with other players from the same category.