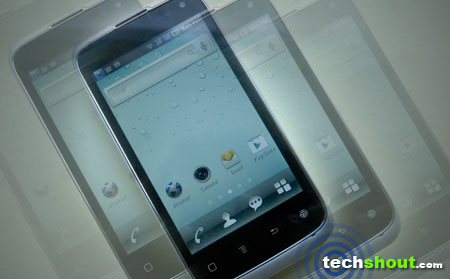 The Spice Stellar Mi-425 is yet another budget-friendly handset that has made its debut in India, and we’re about to put it through a full-scale review. Locked and loaded with the Gingerbread OS (upgradable to Android 4.0), dual SIM support and a decent offering of components, the handset falls under the sub-10K price segment. The rivals this piece of hardware is up against appear to be equally capable on paper and some even have more enhanced specs compared to this device. The noteworthy ones include the Micromax A90 and A100, both of which run on the Ice Cream Sandwich platform and are dual SIM-enabled as well. There’s also the Huawei Ideos X5 Pro smartphone in the list. If you’re interested in knowing more about how this ‘on-budget’ device fares, keep reading.

Most manufacturers have managed to give their budget phones some good looks and a fine deal of performance. Spice is apparently one of those companies, but there’s a downside when it comes to the design of the Mi-425. The handset is dressed in a similar design language adopted by several HTC devices. This bulky piece of hardware isn’t as heavy as it may appear to be. It weighs 110 grams and measures 125mm x 63.5mm x 12.5mm in dimensions. Like in most other smartphones, the touchscreen employed here is surrounded by a thick bezel which is incorporated along with the usual capacitive touch buttons, 4 in this case, and a 0.3MP front-facing camera as well as a light sensor. 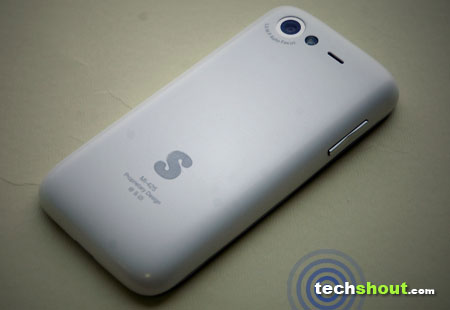 A second bezel runs alongside the edges of the Spice Stellar Mi-425, drenched in silver. On the right, you’ll find a micro-USB port, while the volume controls are located on the left. The power key and the 3.5mm audio jack are situated on the top. For now the device is being offered in a white version and the color is only sprayed onto the rear panel which has a housing for the 5MP camera and LED flash along with a Spice ‘Propriety Design’ branding that’s centered on the lower half. If you pop open the rear, you’ll be presented with the dual SIM slots and a microSD card bay which are accessible only when the large 2000mAh battery is removed. 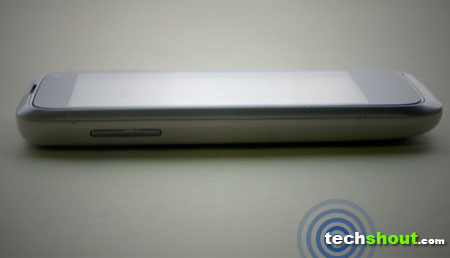 If the design isn’t the green light you’re looking for in a budget phone, the specifications could just change your mind. Like we said before, the Spice Stellar Mi-425 packs in a decent list of hardware components. Firstly, the company states that it’s ICS-upgradable. The roll-out hasn’t taken place as yet, nor has the company provided any official date, and it’s been nearly 3 months since the phone made its debut. Hopefully the upgrade won’t be one of those empty promises some manufacturers tend to give out. 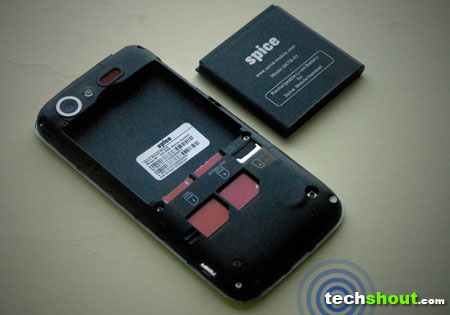 We’re going to keep things short and simple here with a quick run through the specifications. Resting on the front is a 4-inch capacitive display proffering a resolution of 480 x 800 pixels and 5-point multi-touch input. As mentioned above, the Android Gingerbread platform runs the show. And powering it up is a Qualcomm Snapdragon S1 MSM7x27A processor ticking at 1GHz. The Adreno 200 module takes care of graphics rendering, while 512MB of RAM can provide smooth operations. The built-in storage isn’t anything near to being sufficient for basic hoarding needs with just 200MB to offer. Well, the addition of a microSD card slot does good here by allowing you to throw in up to 32GB of memory. 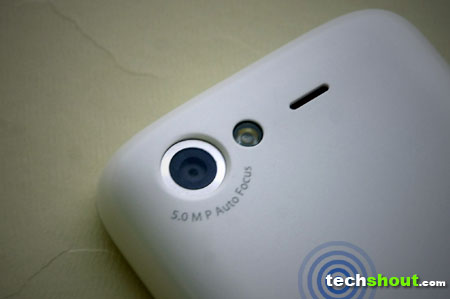 When it comes down to performance, the Spice Stellar Mi-425 scores better than the HTC One V in AnTuTu benchmark. The difference isn’t much as the former acquired 2948 points, while the latter wangled a score of 2703. On Quadrant Standard Edition, the device managed to peak at 1447 points in a full benchmark test. The images we snapped up lived up to our expectations, but video capture took a wrong turn.

The recording process is quite smooth with no lags and so is playback, but visuals are grainy and appear pixilated even on the handset’s 4-inch display. And don’t get us started about viewing HD clips. Our test content which has worked flawlessly on various Android phones, failed to run on this handset. The other disappointing bits include the inability to swap the microSD card while the phone is running and the slow-to-respond accelerometer sensor. The 2000mAh Li-ion battery can deliver a day’s worth of Android fun on a single charge. That’s inclusive of both cellular networks being active, one 3G and the other 2G, browsing the web over Wi-Fi for about an hour and a half as well as approximately 3 hours of music playback.

The battery life here is pretty good for a dual SIM phone.

The device comes with a host of entertaining features (as long as you don’t only want HD videos) and a generously sized touchscreen for the budget-minded. Throw in a good pair of cans and you’ll have an enjoyable music experience.

The accelerometer sensor isn’t very responsive – the outcome can be seen while carrying out tilting gestures in motion-based games.

The microSD card slot isn’t hot-swap capable. That means you need to shut down the phone in order to replace the MMC.

The device’s form factor may look rugged, but don’t expect it to take a fall and not show any sign of damage.

This Android smartphone refuses to play 720p HD videos; we’re talking about the very same clips we’ve been using to test visual playback on most review units at our HQ.

The smartphone does bring up various issues for us to complain about, but at the same time, it packs in a pretty good punch when it comes to offering features and capabilities. All in all, for a price of approximately Rs. 9,499, the Spice Stellar Mi-425 is a great bargain and it’s soon to get a taste of Ice Cream Sandwich as well, or so says the company. A 7.7 out of 10 rating is what this piece of hardware has earned.