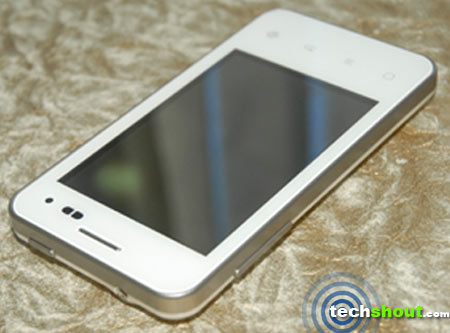 The Spice Stellar Craze Mi-355, a budget-conscious smartphone that’s not supposed to dig a deep hole in your pocket, just toddled into our review labs. Dressed in pristine white, this Android beast seems to have drawn inspiration from the Stellar Mi-425 which visited us not long ago, but its specifications are far more toned down as compared to the latter. Like most other contenders belonging to the category of low-cost smartphones, the device employs a touch panel and tags along some sought-after features such as dual SIM support and HSDPA network compatibility besides the common ones like dual cameras, a microSD card slot and Wi-Fi tethering. So without further ado, let’s find out what this Gingerbread treat has in store for us.

While we expect a phone with dimensions of 118 x 62 x 11.5 millimeters to have a huge touchscreen, the Mi-355 offers nothing more than 3.5 inches of multi-touch real estate. It’s not all that bad, but a lot of space that has just been wasted could have been put to some use. So you have a wide bezel along with 4 capacitive touch buttons that dominate all the ‘wasted’ area on the lower side of the front panel. A front facing camera and a light sensor are also in place. The white-colored device has a kind of plastic feel to it and sadly, both front and back panels have a strong affinity for fingerprints.

The Spice Stellar Craze Mi-355 is bulky with rounded edges and surprisingly light in weight, at merely 93.2 grams. Another silver-colored thick bezel runs along the perimeter of this candy bar phone, embedded with a USB port and a microphone on the lower side, and a standard 3.5mm headphone jack as well as the power button on top. The left edge of this bezel sports a volume button. And finally, on the flip side there’s a primary camera with dual LED flash. 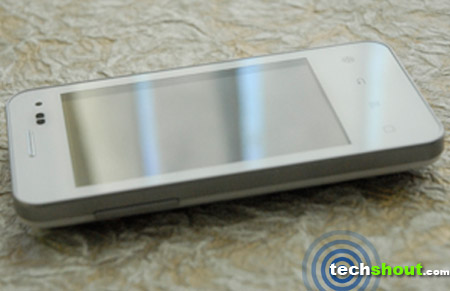 Its toned down specifications make the device apt for first time smartphone users. An HVGA multi-touch display spanning 3.5 inches, delivers clear and vivid images at 320 x 480p resolution. Although it runs Gingerbread v2.3.6, the handset is upgradeable to Ice Cream Sandwich, but so far the company has neither released an update nor announced a date on which it will be rolled out. 512MB of RAM and an 800MHz Qualcomm Snapdragon S1 processor appear more than willing to support multiple tasks at the same time, while there’s just 512MB of memory on board. Nevertheless, you have at your disposal an expansion slot allowing you to hoard your digital stuff on a microSD card of up to 32GB capacity.

The 5MP primary camera on the Spice Stellar Craze Mi-355 is blessed with features like dual LED flash and digital zoom amongst others. It lets you control the exposure and choose a scene mode, picture quality and picture size according to your preferences. The front facing 0.3MP webcam also offers up to 4x digital zoom and naturally lets you engage in video conferencing over the web using applications like Skype. And to top it off, it’s capable of supporting two SIM cards (3G + 2G) at the same time and can run on the HSDPA network. And no it is not devoid of Bluetooth, built-in Wi-Fi or GPS either. 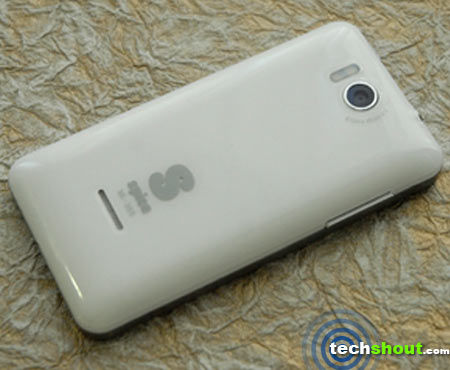 On the performance front, it does manage to offer a satisfactory result, but we have seen other Gingerbread devices doing much better. Its AnTuTu Benchmark score is nowhere close to those of the LG Optimus 3D Max, Lava Xolo or Motorola Atrix HD, not that we expected it to beat these either. Nevertheless, the phone manages to score better, 54 points better, than the HTC One V as it clocked in 2757. But it’s not as good as the Stellar Mi-425 which managed a 2948. And as for the Quadrant Standard Edition test, the device managed a 1209. 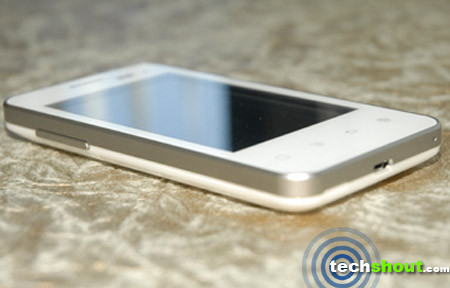 The primary camera is not all that bad. It clicks pretty decent images, but seems to lose its focus as soon as you zoom into your subject and the resulting image appears grainy, which is something that we do not expect from a 5MP camera. As far as video recording and playback are concerned, the Spice Stellar Craze Mi-355 is about average. It records clear videos, but doesn’t give you the option to zoom in or switch modes while recording. You can use its LED flash while making movies though. The 0.3MP front camera is good for video calling and even records satisfactorily.

The phone’s battery life is something that will be appreciated by those of you who are not too keen on owning a mobile companion that must be plugged into a socket every now and then. It stuck around for a good 7 hours with two active SIM cards and a 2G network connection when we put it through approximately an hour and a half of internet browsing, close to 4 hours of music playback and about half an hour of gaming. 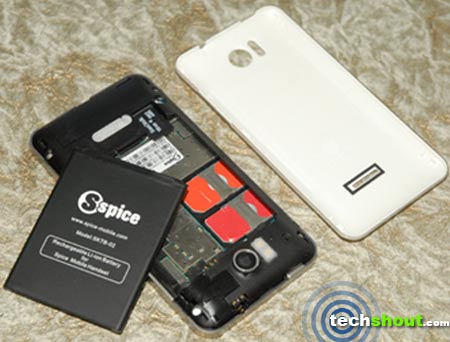 In spite of all the wasted space, the Spice Stellar Craze Mi-355 has a decent 3.5-inch touchscreen.

The music playback is good and you can rely on the phone to keep you entertained on the move.

Dual SIM capability comes in handy if you wish to use different SIM cards for the sake of data connectivity.

The white-colored device is not at all resistant to fingerprints.

Spice has yet again frustrated users by choosing not to add a hot-swap expansion slot. So you need to switch the phone off before changing the memory card.

Although it is deployed with all the necessary sensors, the phone isn’t capable of detecting tilt motions. So games that require tilt controls are practically useless on this particular device.

720p videos are not supported by this piece of hardware.

We wouldn’t say that the handset impressed us as much as we would have liked. But all things considered, the phone does come across as a good option for those who do not mind using Gingerbread. It’s the nail biting wait for Ice Cream Sandwich that would have us peeved. And with a sub-7K price tag, the phone doesn’t do too badly. It manages to earn a 7.5 on 10 from us.