Spice has put up two new smartphones on its official website in India, the Stellar 517 and Stellar 470, and they’re both expected to hit stores in the coming days. The OEM has also revealed price details for the handsets which surprisingly are the same at Rs 7999.

Judging by the price, you’d expect both smartphones to be very similar is specs and they most certainly are. However, they do have a few unique features and flaunt different designs as well. The Spice Stellar 517 is basically a variant of the Stellar 518 which went on sale a month back with a 4000mAh battery. 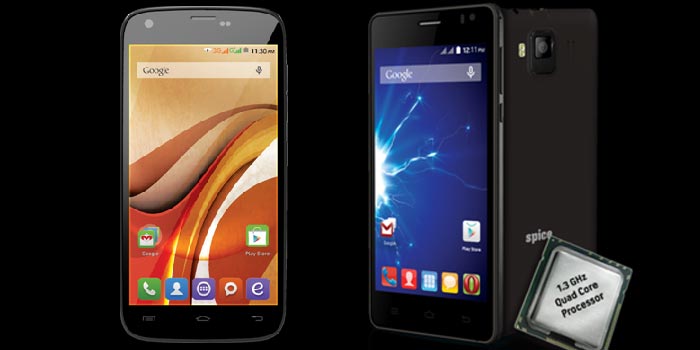 The new release is a slightly toned down version featuring a 3000mAh power pack and a lower resolution front camera of 1.3MP. What sets the Stellar 517 apart from the Stellar 470 model is that it carries a large battery which results into a thicker design of 9.8mm. There’s also a 5-inch FWVHA display here and a 3.2MP front snapper.

Also read: Spice tries its hand at an iPhone 6 Plus clone, creates a weird-looking smartphone instead

The latter device, however, is just 7.9mm thin and sports a lower capacity cell of 1500mAh. The screen size is smaller at 4.7 inches, but with a higher resolution of qHD. Also, a 2MP secondary camera sits on the front. Rest of the features is more or less the same.

Below are the common features of the Spice Stellar 517 and Stellar 470:

The Spice Stellar 517 and Stellar 470 should go on sale in the coming days and we don’t expect them to get an official launch in India.