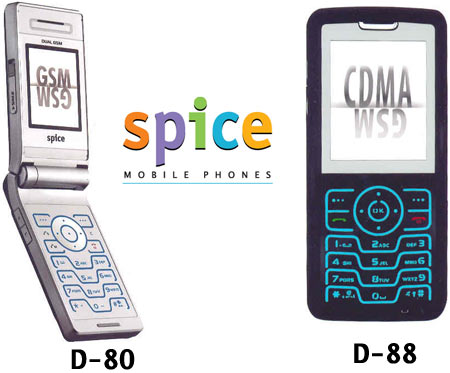 Do you find yourself toting around two mobile phones, one for work and the other one for private use? Now, you won’t need to confuse yourself anymore, as Spice Mobile has introduced the Spice Dual phone, which offers an in-built option of two SIM cards, allowing the user to carry just one phone instead of two.

The Spice Dual comes in two variants- the D-88 and the D-80. The Spice Dual range of phones happens to be a technological first from Spice Mobile in India.

The presence of the in-built option for two SIM cards allows the user to make or receive calls from any SIM at any time as well as receive and send SMSes.

According to Mr.Kunal Ahooja, CEO, Spice Mobile, “The introduction of the Dual Phone is not only an indication of Spice’s belief in providing “more value” to consumers but also a commitment to bring forth technologically innovative products. The market scenario also prompted us to introduce the Dual Phone. It is estimated that around 8 per cent of mobile phone subscribers already owns two numbers and we do foresee this trend to grow as we move along.”

The Spice Dual handset has a sleek and slim body with a 2,62,000 TFT and a 2-inch vibrant color screen.. This phone provides four operation modes namely GSM and CDMA dual; CDMA and GSM dual; CDMA only and GSM only.

The Spice Dual handset also has a 1.3 mega pixel; camera that is capable of capturing high quality images. Other features of the Spice Dual mobile phone include a special integrated music and video player and video recording and playback.

The Spice Dual phone has a 256MB built-in memory card. But, the phone also offers the option of expandable memory.

The Spice Dual D-88 handset is priced at Rs.9849 and is available immediately, while the D-80 phone is expected to hot the market soon.

Speaking about future plans of Spice Mobile Mr.Kunal Ahooja said, “Moving forward, as a company whose mantra lies in being innovative we plan to introduce the ‘Movie Phone” with in-built DVD player and a sub 1000/- people’s phone soon.”