Sony’s latest flagship slate, the Xperia Z2 Tablet, follows the footsteps of its predecessor by achieving the title of the world’s slimmest and lightest waterproof tablet. Compared to the previous model, this one is quite a major upgrade carrying high-end components and an improved display.

Where appearance is concerned, the Sony Xperia Z2 Tablet looks no different from its predecessor. The main attraction here is the super slim design and lightweight form factor. The slate measures just 6.4mm, making it a millimeter thinner than the Z Ultra phablet. Also, it tips the scales at just 426 grams. Along with the OmniBalance design, the company has also made the device water- and dust-resistant meeting IPX5 and IPX8 standards. 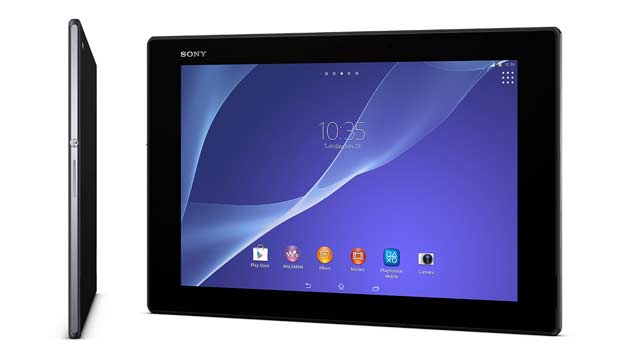 The Sony Xperia Z2 Tablet is designed with the same core specifications found in the flagship smartphone. The slate features a 10.1-inch full HD Triluminos touchscreen backed by the new Live Colour LED technology and X-Reality for mobile. The device is amongst the few to come with Android 4.4 KitKat, while the heavy lifting is done by a quad core Snapdragon 801 SOC. There’s also 3GB of RAM, 16GB of storage and an 8.1MP rear camera.

Sony is also offering various accessories with the Xperia Z2 Tablet. First on the list is a Bluetooth speaker which doubles as a charging dock. You’ll be able to control media apps with the Bluetooth remote that even has a built-in headset. Then there’s the keyboard dock that also acts as a protective cover.

The Sony Xperia Z2 Tablet will go on sale globally starting next month in Wi-Fi-only and cellular models.