Sony’s ‘Resistance: Fall of Man’ Video Game being targeted by Church of England 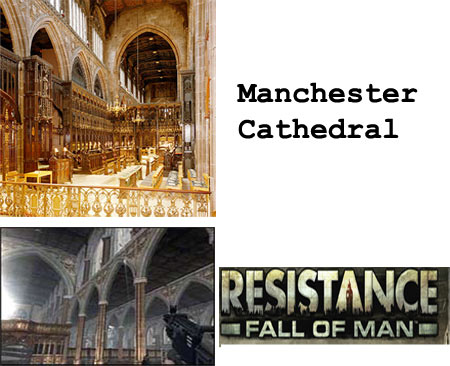 Video games are being given a bad name yet again. Sony is in trouble for one of its top-selling PlayStation 3 video games, Resistance: Fall of Man. Apparently, the Church of England is calling upon Sony to apologize and withdraw the game as the company used the interior of the Anglican cathedral for a virtual gun battle.

The hit video game portrays one of the battles at a church in Manchester where troops fight the Chimera. A violent gun battel follows.

Church leaders have gone as far as accusing Sony of the “desecration” of Manchester Cathedral.

The Dean and Chapter at Manchester Cathedral say that Sony failed to ask permission to use the nave as a setting for a virtual shoot-out between resistance fighters and their enemies in an alternative world during 1951.

The Resistance: Fall of Man sequence has even caused distress to Manchester clergy who preach regularly against the city’s rising gun crime problem. They wish to promote the Manchester cathedral as a centre of peace and reconciliation.

Ted Price, President of Insomniac Games, the developer of Fall of Man said that the scenes were designed after an “environmental artist” visited Britain.

Here is what David Wilson, a Sony spokesman had to say, “It is game-created footage, it is not video or photography. It is entertainment, like Doctor Who or any other science fiction. It is not based on reality at all. Throughout the whole process we have sought permission where necessary.”

What’s more, Sony has also been branded as “irresponsible” for choosing Manchester- a city plagued by gun violence which has left many youth dead.

Sony has not returned calls to officials from the Church.

The issue has reached the Bishop of Manchester, the Rt Rev Nigel McCulloch who said, “It is well known that Manchester has a gun crime problem. For a global manufacturer to recreate one of our great Cathedrals with photo-realistic quality and then encourage people to have gun battles in the buildings is beyond belief and highly irresponsible.”

“Here in Manchester we do all we can to support communities through our parish clergy, we know the reality of gun crime and the devastating effects it can have on the lives of people- it is not a trivial matter,” he continued.

Well, Resistance: Fall of Man is such a brilliant game. Personally, we at TechShout, who are major fans of the game, do not find anything wrong with the inclusion of the cathedral in Manchester, as it is just a reproduction of the same. No doubt, Manchester has a high crime rate, but the video game portays man fighting the Chimera, an imaginary species, and not notorious gangs of people.

Yes, once again, video games are being given a bad name. Just because a city has a rising gun issue, it does not mean that one has to go all out and blame everything else that is not even related one bit to it. Maybe if we all looked at our own misdeeds and faults… that would perhaps make a change.