It’s more or less confirmed that Sony is working on a new slate under the very odd Xperia Z3 Tablet Compact name and we may have just gotten the first look at the device as well as the upcoming SmartWatch 3. The Japanese conglomerate has rolled out a teaser image which shows an unreleased tablet and a new watch that looks like an updated version to the current smart watch.

XperiaBlog notes that the device shown in the image below could very well be the Sony Xperia Z3 Tablet Compact and it looks to carry a display of around 8 inches in size. The teaser highlights that the slate will be water-resistant and pretty slim. The exact thickness isn’t known for now, but AndroidOrigin claims to have received details on the hardware via a tip. 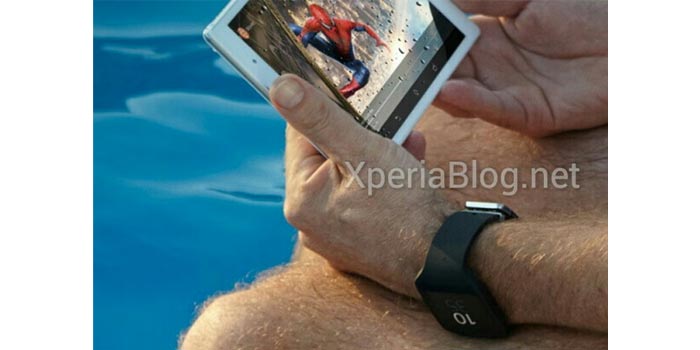 Like the 10.1-inch Xperia Z2 Tablet, the Compact model will also be fueled by the Snapdragon 801 SoC. However, the chipset will be slightly faster offering a clock speed of 2.5GHz. Memory provisions will be the same at 3GB RAM and 16GB internal storage, while the rear will sport an 8MP Exmor RS camera.

Apart from these features, the tablet will also have a battery capacity of around 4500mAh to 5000mAh and connectivity options such as 4G LTE, NFC and Bluetooth 4.0. Coming to the new wearable accessory, the teaser image hints that the upcoming SmartWatch 3 will also be water-resistant. Previous leaks have suggested that the device will run on a custom OS and not Android Wear, and offer wireless charging.

The Sony Xperia Z3 Tablet Compact and the SmartWatch 3 accessory will go official next week on September 3 along with three new smartphones and a Lens-Style camera attachment.