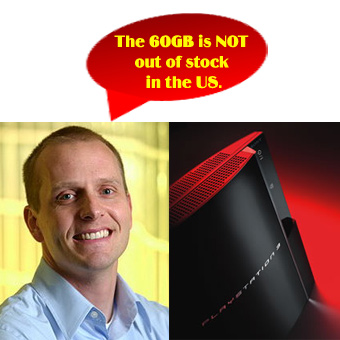 Yesterday there were reports circulating around the internet that stated that there were no more 60GB PlayStation3s (PS3s) in Sony’s warehouses, any longer. Sony too agreed that that indeed there weren’t any PS3 gaming consoles left as they all had been shipped to the retailers. GamePro was the first site that reported on this bit.

However, now there is news that Sony has restocked the 60GB PS3 online. Sony has reloaded its 60GB PlayStation 3 supply on Sonystyle.com.

In fact Sony’s senior director of corporate communications, Dave Karraker, went on to the height of saying that the company does have adequate inventory for anyone who wants to buy a PS3 in North America

Dave Karraker stated, “The 60GB is not out of stock in the US. SonyStyle.com currently has a back order notice up on their site, but they are shifting some inventory and will have it available again soon. All we can say at this point is we have ample inventory for anyone looking to buy a PS3 in North America.”

So all you gamers who are keen on buying the PS3, rush to SonyStyle.com soon.