Rumors of Sony launching a 12-inch Surface competitor have been around since October and today, we may have just gotten the first look at the device which is said to arrive as the Xperia Z4 Tablet Ultra. This does go well with the company’s current branding approach, so it sounds very authentic, but the hardware listed with the device is questionable.

PhoneArena is reporting that Chinese website Padnews has managed to get its hands on an image and key specifications of the Sony Xperia Z4 Tablet Ultra. Based on the information provided, the slate will be of 12.97 inches which makes it larger than the Surface Pro 3. The display is said to be an LED panel with 3840 x 2400 pixel resolution which isn’t really surprising. 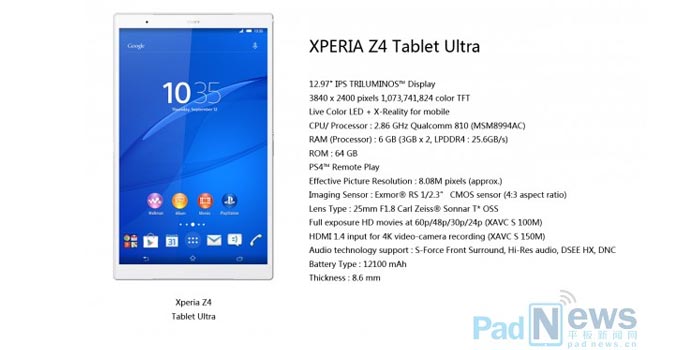 But we do have a few doubts about the design. As you can see in the image above, the slate will have slim bezels like the Xperia Z3 Tablet Compact. This works well on small form factors under 8 inches, but with devices of such size, it’ll be a hassle using the screen without any accidental touches.

Also, it’s highly unlikely that Sony will offer voice calling on a large tablet, but we could be wrong. And considering that the Xperia Z4 Tablet ultra will go official early next year, Android Lollipop is obviously onboard, but the image shows the device running KitKat.

If you look closely, you’ll notice that device’s design is identical to that of the Z3 Tablet Compact and the image is probably Photoshopped. If that’s not enough, we highly doubt Sony will take a risk in the Android market and offer 6GB of RAM, especially when it’s having a tough time selling its devices.

From the way we see it, the design and specs don’t add up and we’re going with fake on this Sony Xperia Z4 Tablet Ultra leak. Do note that the company could very well be working on a device of the same name, but we doubt it’ll be the same as this one.