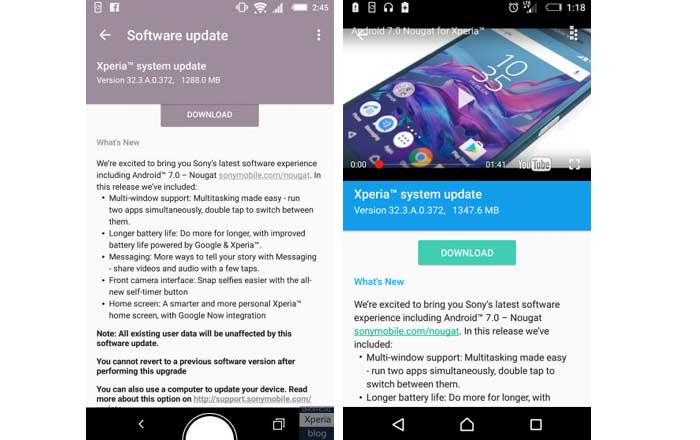 Sony has kickstarted the OTA rollout of Android 7.0 Nougat for the Xperia Z5 series, as it had promised to do back in August last year. It also appears to have begun sending out Google’s latest OS to the Xperia Z3+ and Z3+ Dual.

As per Xperia Blog, Sony’s Nougat update is currently hitting select variants of the Xperia Z5 and Xperia Z5 Premium. It predicts that the promotion will soon arrive for the Xperia Z5 Compact and and Xperia Z4 Tablet. Both the Z5 and Z3+ lineup are getting the same 32.3.A.0.372 firmware build.

The Android 7.0 upgrade is accompanied by a number of changes. For instance, Sony claims the phones will boast of longer battery life thanks to the combined efforts of Google and Xperia. It’s also introducing a smarter and more personalized home screen with the added benefit of Google Now integration.

Other notable changes include a brand new front camera interface that is supposed to make it easier to shoot selfies thanks to a self-timer option and enhanced multitasking support. The latter encompasses Nougat’s multi-window skills and the ability to switch between two apps via a double tap.

Sony also mentions that people can now share audio and video in a few taps while using Messaging. The company notes that all existing user data won’t be affected by the software update. However, individuals won’t be able to revert back to a previous version after they’ve switched to the OS.

The Nougat update weighs in at 1288MB for the Z5 family and 1347.6MB for the Z3+ duo. It’ll probably reach all users slowly over the next few days.