Sony’s Xperia Z2 may or may not be headed to Verizon, but we can confirm that the Xperia Z3 flagship is indeed on its way to T-Mobile. The smartphone has been spotted on the company’s website and we expect to hear official word on its US launch at the October 9 event.

Xperia Blog notes that a separate version for Verizon might also be reveled at the event under the Sony Xperia Z3v moniker and we might probably see the new compact tablet reach the US as well. The handset headed to T-Mobile will be slightly different from the international version. The carrier model will have 32GB of onboard storage, while the latter one only has 16GB. 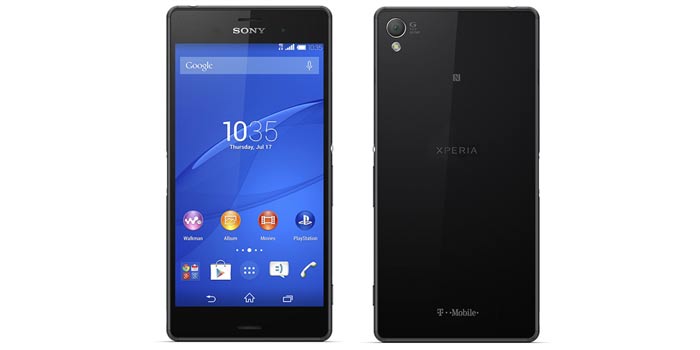 A microSD card slot is also on the cards with support of up to 128GB of additional storage capacity. The image posted above is the official press render of the phone headed to T-Mobile as the carrier’s branding is visible on the rear. The device is the company’s latest flagship and while it isn’t much of an upgrade over the Z2, there are many alluring features onboard, especially in the software department.

Along with Android 4.4.4 KitKat, Sony has thrown in PS4 Remote Play support which allows you to play PS4 titles on the smartphone with the Dualshock 4 controller. Compared to its predecessor, the phone is lighter even slimmer at 152 grams and 7.3mm, respectively.

As mentioned above, you can anticipate seeing the Xperia Z3 Compact and the Z3 Tablet Compact in addition to the Sony Xperia Z3 flagship at the event on October 9. The former two devices could go on sale unlocked.