It’s no hidden fact that Sony will launch a new flagship phone in the next few months and everyone’s best guess is that it’ll be called the Xperia Z3. Now while we expect the device to offer better features compared to the current Z2 flagship which is a pretty beasty device, the Japanese conglomerate might serve it up with little modifications.

We haven’t got the technical details as yet, but a screenshot from the Sony Xperia Z3 posted by Xperia Blog highlights a couple of specs. First and foremost, the About page shows the Qualcomm MSM8974Pro-AC as the processor which is basically the same chipset found on the Galaxy S5 and LG’s G3. Compared to the one on the Xperia Z2, this CPU will offer a slight speed boost of 200MHz and the GPU’s frequency will be increased as well, but by a mere 20MHz. 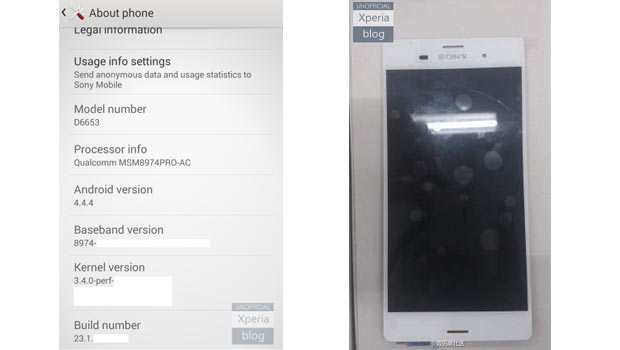 Previous rumors have suggested that the upcoming flagship will house a Snapdragon 805 chipset considering the time of its release. This is still a possibility since we could be looking at details of an early prototype. The screenshot also disclosed an important feature of the phone – Its screen resolution. The image is 1920 x 1080 which suggest that the new handset will continue to carry a FHD panel and not get upgraded to a QHD one.

Sony doesn’t appear to be following the same route as its peers. The leaked image of the Xperia Z3 shows that very little has been changed where design is concerned and the screenshot suggests that there might not be major improvements in the hardware department either. So what are the company’s plans for its future flagship? It’s too early to speculate about that, so we’ll just have to wait.