It’s more or less confirmed that the Sony Xperia Z2 and Z2 Tablet which went official earlier this year will be treated to the PS4 Remote Play feature that was showcased with the new Xperia Z3 flagship series. The Japanese conglomerate hasn’t officially revealed this information, but the details were disclosed via an official channel.

Xperia Blog notes that the PS4 Remote Play feature was listed as compatible with the Sony Xperia Z2 and Xperia Tablet Z2 on the Xperia Lounge application, and it has managed to capture a screenshot of the post as well (see below). The slip-up also reveals that the new attribute will be rolled out in November. 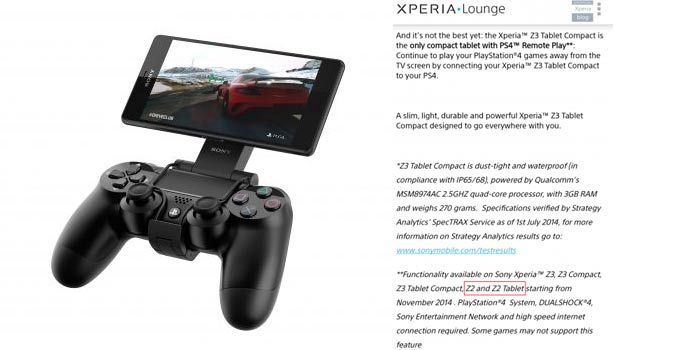 This suggests that remote play will arrive with the Android 4.4.4 KitKat update which is yet to roll out for the early 2014 flagship series. Sony bringing the feature over to its Z2 range isn’t surprising considering that there isn’t much of a difference between the devices where hardware is concerned.

Sadly, it doesn’t look like the Z1 will be given the same treatment despite it being powered by a slightly slower CPU. PS4 Remote Play was originally introduced for the PS Vita handheld console and the new Z3 series which includes the new tablet and mini smartphone. The mobile lineup is the only one in the Android ecosystem to be supported.

For those new to the attribute, it does exactly as the name suggests. With the feature, you’ll be able to stream your PS4 games to the smartphone or tablet and enjoy them from anywhere in the house. Visuals are transmitted via Wi-Fi and you’ll have to use the Dualshock 4 controller for playing.

As mentioned above, PS4 Remote Play support will hit the Sony Xperia Z2 and Z2 Tablet in November.