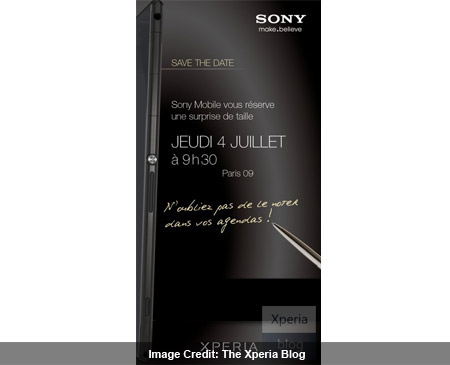 We can finally have our first official glimpse at the Sony Xperia Z Ultra – or the Togari phablet as it’s also called – as an invite for its launch in France has teased the device by revealing its side panel. This unveiling event is slated to take place on July 4 which is strange, as another such affair was also revealed to have been slated to transpire in Germany, but as early as on June 25. Will we be seeing two separate devices at both of them then? Anyway, the invite in question which is in the hands of the unofficial Xperia blog reads ‘Sony Mobile reserves a big surprise for you.’

Furthermore, it also says, ‘Do not forget to mark your calendars.’ But as can be seen in the image above, the French word ‘noter’ which means Note can easily be seen as a jibe at the Samsung Galaxy Note series that popularized the phablet genre, and which is being seen as the main competitor for the Sony Xperia Z Ultra. And don’t forget to notice the stylus in the image. This metallic-looking unit will be in direct competition with the S Pen.

Following the Z smartphone, a number of gadgets from this range of the company have embraced the water and dust proof approach. The Sony Xperia Z Ultra was also rumored to be such a product, but now it’s not quite sure whether that’s the case or not. Purely because in the teaser image, the 3.5mm jack which is resting on the top doesn’t seem to feature a covering of any sort.

For those who need a refresher of the rumored specs it is expected to come infused with, the Sony Xperia Z Ultra is said to carry a 6.44-inch full HD display which supposedly kicks in the ‘Triluminos with X-Reality for Mobile’ technology. It apparently runs on a Snapdragon 800 chipset with a 2.2GHz quad core processor and Adreno 330 graphics. And apart from 2GB worth of RAM, 16GB of internal storage, a microSD memory card slot, an 8MP camera and Android 4.2 Jelly Bean OS are some of its other offerings.

We’re sure to find out more details about the Xperia Z Ultra by the end of this month.