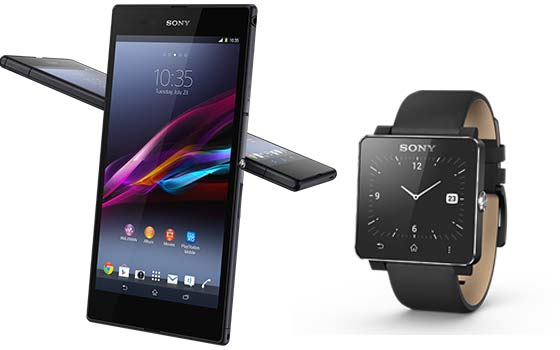 The recently launched Sony Xperia Z Ultra smartphone and the SmartWatch 2 have been affixed with retail tags for Europe and the accessory is also being made available for pre-order. Apart from these, Sony showed off a couple of more Android devices at the Mobile Asia Expo, namely the Xperia C and the China variant of the SP.

The Sony Xperia Z Ultra was under the spotlight for many months before it went official. The device as its name suggests, is a larger and beefier version of the current flagship. Although being referred to as a smartphone, the handset is nearly the size of a tablet carrying a 6.4-inch 1080p FHD touchscreen proffering a Triluminos panel that’s powered by the X-Reality engine.

Additionally, the Sony Xperia Z Ultra is amongst the slimmest there is measuring just 6.5mm and it weighs 212 grams. The form fact has a reflective glass surface and water- as well as dust- resistance which meets IP55 and IP58 standards. The innards comprise of a quad core 2.2GHz Snapdragon 800 SOC, 2GB of RAM, 16GB of storage and a large battery that can deliver up to 14 hours of talktime or 7.5 hours of HD video playback.

Coming to the SmartWatch 2 or SW2 as referred to in short, the device is the successor to last year’s accessory which recently went open source. The current iteration aims to deliver enhanced features when connected with an Android device running ICS or above. It features a 1.6-inch Transflective LCD and connectivity modules such as Bluetooth 3.0 and NFC. Unlike the aforementioned phablet, this gadget is only splash-resistant.

A post on Unwired View points out that the company’s Netherlands press release has pegged the Sony Xperia Z Ultra with an estimated price of €729, which is a steep amount to pay. But the Xperia Z Ultra should be worth it considering the features it has to offer. The retail amount for the SmartWatch 2 on the other hand, has surfaced through a tweet sent out by the conglomerate’s France twitter account which has pegged the accessory at €199 with a late September release date, or £120 according to Clove which has started to take pre-orders in the UK.