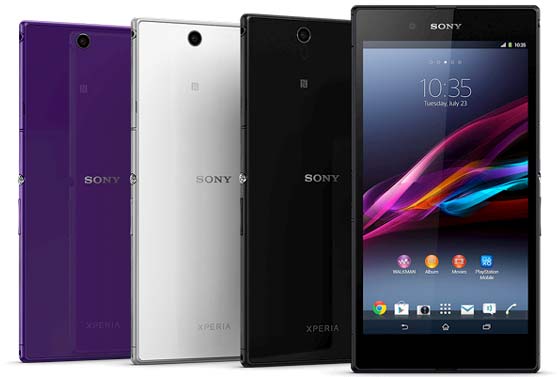 After recently popping up on the company’s official India-based website, the Sony Xperia Z Ultra release date details have even surfaced through the usual source, an online retailer. The almost tablet-sized Sony phablet is expected to arrive by the end of this month in color options of black, white and purple.

The Sony Xperia Z Ultra has already been announced for Europe along with the SmartWatch 2 accessory. And just a few days back, price details for the phablet surfaced through various retailers in the UK. The possibility of it arriving in the country in question by the end of this month is relatively high as it’s expected to go on sale in certain Asian countries in the coming weeks.

The Sony Xperia Z Ultra went official nearly a month back and it’s being touted as the slimmest FHD phablet. That being said, the handset is just 6.5mm thick and it weighs 212 grams. On the front, buyers will be greeted by a 6.4-inch 1080p Triluminos touchscreen which is powered by the X-Reality for mobile engine instead of Bravia 2. One of the main highlights here is that the touch panel supports flexible input options where users will be able to utilize things like a pencil as a stylus.

The Sony Xperia Z Ultra is also one mighty performer with the Android 4.2 OS and the latest Snapdragon 800 processor powering it up. The CPU comes in a quad core configuration with a 2.2GHz clock speed and it features Adreno 330 graphics. Apart from these, there’s an 8MP Exmor RS snapper on the rear, a 2MP front camera and a 3,000mAh battery.

The aforementioned release timeframe of around July 31 is based on what retailer Saholic has put up and it could be inaccurate. Where a price is concerned, there’s nothing official as yet or speculated. However, we expect the Xperia Z Ultra to retail for somewhere between the Rs 40,000 and Rs 45,000 range.