The US is being treated to the Sony Xperia Z Ultra LTE, Nokia Lumia 625 and LG Optimus GJ smartphones which have turned up through a couple of retailers. What’s worth mentioning is that none of these devices have officially gone on sale as yet and there’s no confirmation on when they will be available.

The Sony Xperia Z Ultra LTE was recently spotted making its way through the FCC. This suggests that the device could go official through multiple carriers soon. Well, Expansys has now started offering it for pre-order at $879.99 SIM-free. The gadget features octaband LTE and comes with the same high-end specifications as its HSPA+ variant. They include a 6.4-inch Triluminos display, a Snapdragon 800 SOC, 2GB of RAM and a 6.5mm body. The Nokia Lumia 625 is currently available in the UK and is up for pre-order in India, but it isn’t destined for the US, or so asserts the official launch presser. However, Negri Electronics is offering it SIM-free for $342.50. 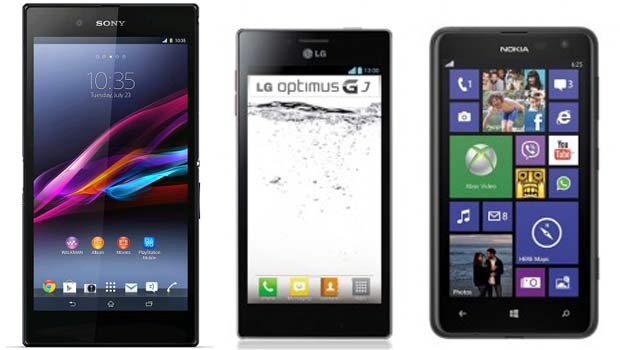 The device is the largest member in the Lumia family and it flaunts a design similar to that of the affordable 620. It features a 4.7-inch touchscreen, a dual-core SOC, WP8 with the Amber update, 4G LTE, 512MB of RAM and 8GB of internal storage. The LG Optimus GJ which goes by the model number E975W is the South Korean conglomerate’s answer to the water-resistant Xperia Z and Galaxy Active. It’s priced at $398.50 and sports a S4 Pro CPU with 4G LTE, 2GB of RAM, a 13MP rear camera, a 4.7-inch HD screen and a 2280mAh battery amongst others.

Let’s quickly round up all the information – The Sony Xperia Z Ultra LTE can be pre-ordered on Expansys for $879.99, albeit there’s no release date as yet. The Nokia Lumia 625 and LG Optimus GJ are both available for purchase on Negri Electronics for $342.50 and $398.50, respectively.