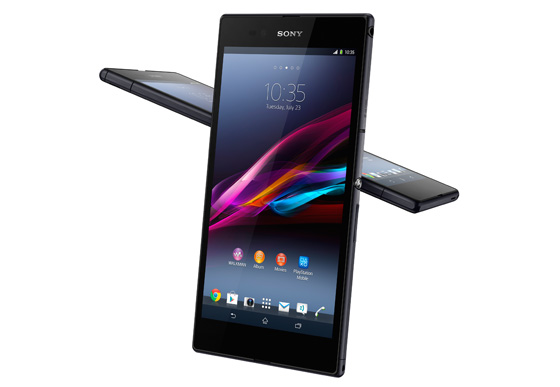 Proving most of the irrepressible rumors right, the Sony Xperia Z Ultra has stepped out in the open finally, totting a 6.4-inch 1080p display on its front surface. But what really takes things up a notch for the phablet category is its embracing of Qualcomm’s latest Snapdragon 800 quad core processor which has been clocked at 2.2GHz, and equipped with 4G LTE connectivity. This Sony device is water and dust resistant as well.

The 6.4-inch touchscreen display of the gadget features the Triluminos technology which has been accompanied by the X-Reality for mobile trait. This screen estate possesses the ability to be controlled using any pencil and selected stylus or pen with a tip diameter of over 1mm. Claimed to be the world’s slimmest full HD smartphone, the Sony Xperia Z Ultra fits into a 6.5mm body, and tips the scales at 212 grams.

This Android 4.2.2 gadget grabs ratings of IP55 and IP58, providing its potential buyers with improved water and dust resistance features than the ones we had witnessed on previous smartphones from this range. The camera setup which makes its way onto the Sony Xperia Z Ultra is highlighted by an 8MP Exmor-RS snapper which is capable of 1080p video recordings, 16x zoom as well as HDR photos and movies. A 2MP secondary camera is present on the front surface.

16GB worth of internal storage memory and a microSD card slot with support for expansions of up to 64GB also find their way into it, apart from a 3,000mAh battery which claims to offer talktime worth of 11 hours over GSM networks. The NFC-equipped Sony Xperia Z Ultra will ship with other additions like HD Voice, the company’s Walkman player, a battery-saving Stamina Mode and more.

The Xperia Z Ultra will be released worldwide sometime during the third quarter of this year in white, black and purple shades.