Sony Xperia Z price in US out, ZL retails at a discount 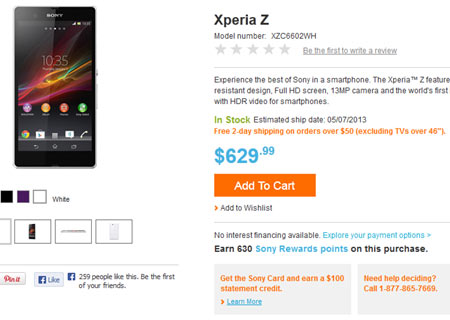 The Sony Xperia Z is now coming to people in the US, and this flagship has been revealed to sport a $629.99 price tag. The handset can be purchased unlocked and sans any carrier commitment in color options of black, white and purple.

It’s been pointed out that the Xperia Z being made available is the HSPA+ C6602 model and not the North American LTE SKU C6606. The main reason behind the absence of the said cellular connectivity could be due to its impending arrival through T-Mobile, which is most probably going to be an exclusive launch. Well, the carrier is yet to make that official and we’re certain that day isn’t far off. 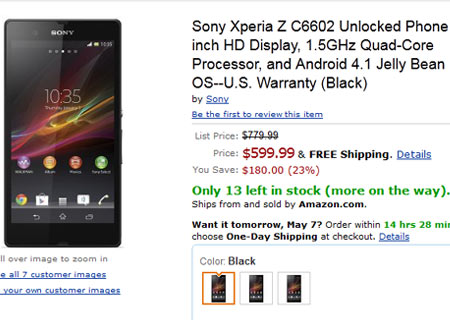 The phone features a 5-inch Reality display and is powered by a 1.5GHz quad core Snapdragon S4 Pro processor with 2GB of RAM. For hoarding content, the device is bundled with 16GB of built-in storage and a microSD card slot. The integrated battery is capable of delivering up to 5.5 hours of video playback, 11 hours of talktime or 550 hours of standby on a single charge.

On the rear, users will be presented with a 13MP HDR-ready camera, while the front houses a 2MP webcam. Sony has thrown in a host of enhancements for a rich entertainment experience. The 1080p display aside, Mobile Bravia Engine 2 augments visuals by optimizing contrast, reducing noise and adjusting color. Audio tools such as 3D surround sound, xLoud, ClearAudio+ and Clear Phase are included as well.

The more compact ZL C6506 smartphone with US-friendly 4G LTE has received a cut in its retail amount. The device is now available from the company’s online store for $629.99, a drop of $130 from the original $759.99. Additionally, Newegg seems to have the cheapest deal available at the moment with the phone on sale for $609.99, plus a $50 discount with the promo code EMCXRXV79. The promotional offer ends on May 8.

The aforementioned sum for the Sony Xperia Z is through the company’s online store in the US. However, Amazon is settling the phone at a much lower rate of $599.99. 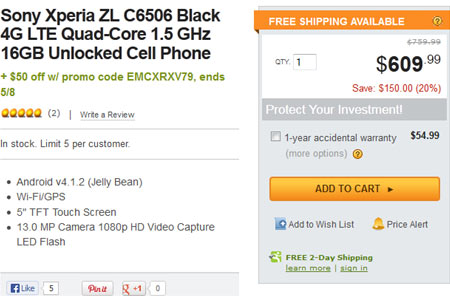 Listed below are the key specifications of the flagship: