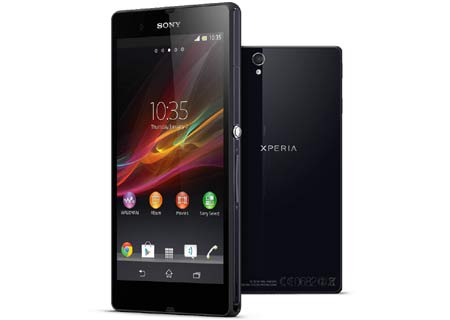 Sony has finally decided to release the Xperia z in India at a price of Rs. 38,990. The company has also announced that the Tablet Z is soon to hit the market in the country this May, but has mentioned no word on how much it will retail for.

The Sony Xperia Z is slightly larger than its ZL sibling, although in terms of slimness, the phone measures 7.9mm compared to the latter’s 9.8mm thick profile. It weighs lesser as well, at 146 grams. Where differences in appearance matters, the compact version has its front-facing camera situated on the low part of the panel, while the rear-facing snapper is aligned in the center. 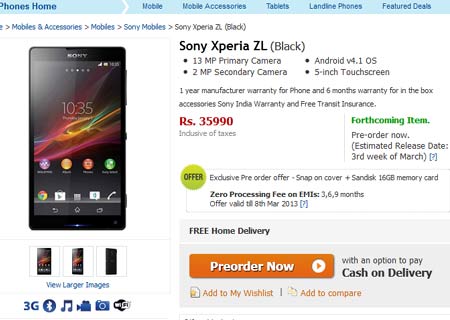 On the bright side, both handsets carry the same set of hardware components. The front features a 5-inch 1920 x 1080 pixels Mobile Bravia Engine 2 touchscreen that’s coated with a scratch-resistant and shatter-proof sheet. A quad core Qualcomm Snapdragon S4 Pro SOC takes care of the heavy lifting and 2GB of RAM has been assigned the task of enabling smooth operations.

One of the main highlighted attributes of the handset is the 13MP camera which packs in an Exmor RS sensor, autofocus, 1080p HD recording and HDR for both image as well as video capture. The 2MP Exmor R front-facing snapper can do FHD movies as well. The device is designed to meet IPX5/7 and IP5X standards, making it water-resistant and dust-proof, respectively. It comes with 16GB of internal storage and is expandable up to 32GB through a microSD card.

The Sony Xperia Z is currently up for pre-order in India at the said price. The device along with the ZL variant which should retail for around Rs. 35,990 can be currently booked through online retailer Flipkart. The former will be available in the country by the third week of March, while the latter’s release date is expected to surface by the end of this month. The company states that the handset will be rolled out in 60 locations across 5 continents this month. 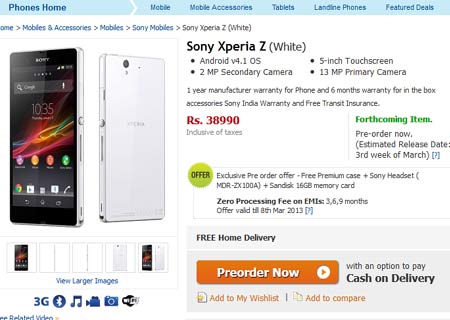 Specifications of the latest flagship: