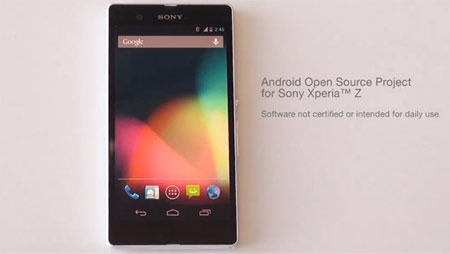 Word floating around town is that a new Sony Xperia Z Google Edition is being prepped for being showcased sometime in July this year. And it’s hard to dismiss this as a mere rumor, as we’ve already seen flagships of Samsung and HTC getting the stock Android treatment recently. A Sony insider has apparently brought out this piece of information through Android Geeks.

The Sony Xperia Z Google Edition, it is said, will be sold using the same process as that of the stock versions of the S4 and the One. They will be made available exclusively in the US through the Play Store. It is indeed possible for stock Android 4.2.2 OS to be installed on the phone in question, as an alpha build is already available for interested parties to be snapped up. However, it is far from perfect, as it’s still under development.

It can also be speculated that since Android 4.3 is currently raring to step on to the field, this phone will come out bearing this latest version of Android. Hardware-wise however, the Sony Xperia Z Google Edition is expected to be the same device that it is right now, with all its water and dust resistance features on-board.

It features on its front surface a big 5-inch TFT display, garnering a full HD resolution of 1920 x 1080 pixels. Sized at 139mm x 71mm x 7.9mm, it carries underneath its hood a 1.5GHz quad core Qualcomm processor and 2GB worth of RAM. It weighs in at 146 grams, and offers the benefits of a 13MP rear-facing camera which kicks in an Exmor RS sensor. A front snapper of 2MP capacity has also been thrown into the mix by its maker.

This DLNA certified device comes equipped with a number of connectivity options including NFC, Bluetooth and more such essentials. The 2,330mAh battery that finds its way into it is able to dish out up to 11 hours worth of talktime and up to up to 550 hours of standby time.

The Xperia Z Google Edition sounds good indeed, but its existence is still to be corroborated. We’ll have more on it if it is.