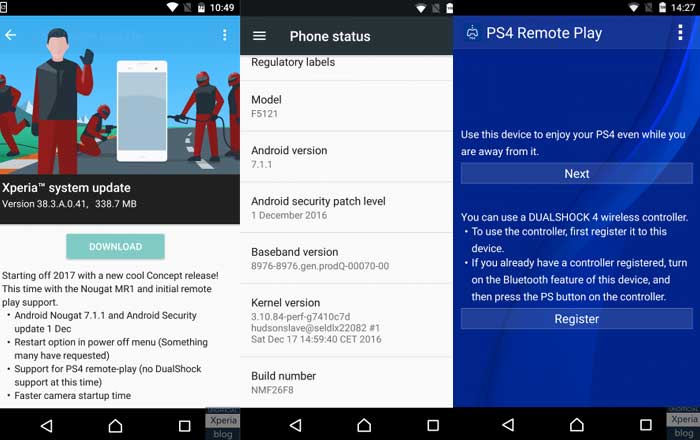 The Sony Xperia X has become the first non-Google smartphone to get updated to Android 7.1.1 Nougat. The manufacturer is currently beaming out the latest OS under the build number 38.3.A.0.41 for people currently on its Concept beta platform.

Sony’s Concept for Android is basically an experimental crowdsourcing program to test software with a small group of users before rolling it out to the public at large. The initiative made its debut in November this year starting off with Nougat and promising a sneak-peek at future features before anyone else.

Concept for Android initially opened its doors to Xperia X owners located in Europe. The team behind the program is now sending out its Android 7.1.1 OTA build for participants with some major changes. For instance, the OS adds support for PS4 Remote Play. It should be noted that DualShock support isn’t available right now.

Other highlights include a new restart option within the power button menu and a much more rapid camera start-up time. Sony’s also integrated Google’s December Security patches within the update. Unfortunately, the company hasn’t confirmed when exactly the upgrade will make the transition to non-Concept users via a stable firmware release.

In related news, a new photo offers the first glimpse at what could turn out to be the 2017 edition of the Xperia X. The image is supposedly a press picture of the handset. It gives very little away in terms of information except that it seems to have very narrow bezels and comes in a black color model.