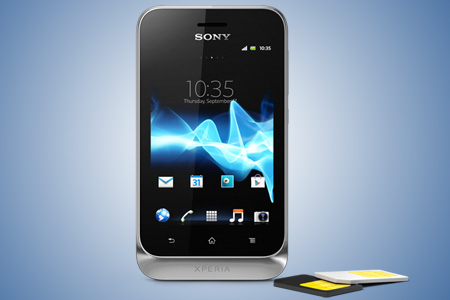 The Sony Xperia tipo dual India price and availability have been revealed as the phone goes on sale on Snapdeal. The Indian online store is usually among the first to get its hands on devices, as was the case with the Xperia ion and the HTC Desire VC. Talking about the GSM dual SIM, touchscreen smartphone, it tags along a host of other attributes including the company’s own Music Unlimited feature.

The tipo dual features a dedicated SIM switch key which allows users to alternate between using either of the network operator cards on the phone at any given time with relative ease. The phone itself ships with Ice Cream Sandwich as the OS and an 800MHz Qualcomm Snapdragon processor on board. Its 3.2-inch, capacitive, scratch-resistant TFT touchscreen complements the 3.2MP camera fitted on the back, capable of 4x digital zoom and video recording.

There is an on-screen QWERTY keyboard making it easy to type out messages and notes. The Sony phone comes with about 3GB of internal memory of which 2.5GB is user-accessible while there is a microSD expansion slot capable of taking cards of up to 32GB. Meanwhile 512MB of RAM has been added making sure the preloaded apps runs without a hitch. And yes, these apps include Mail, Maps and Voice Search from Google. 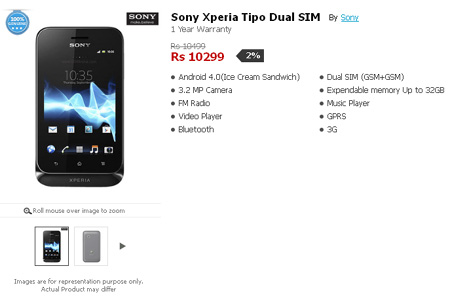 Like we mentioned, the Sony Xperia tipo dual India price and availability details have been disclosed. It is available for purchase on Snapdeal at a 2 percent discounted rate for Rs. 10,299 and carries with it a one-year warranty.