We’ve shown you what the company’s flagship smartphone (read our review) can do and now, we’re taking the Sony Xperia Tablet Z for a spin to provide you with an in-depth review of the rugged device. The Japanese conglomerate hasn’t played too many hands in the slate game and so far, it has only delivered a few Android slabs over the years including the one in question. Well, thanks to its expertise in multiple fields such as entertainment and photography amongst others, you can expect to find various popular technologies under a single roof for an immersive experience. So join us as we find out whether this piece hardware stays true to its name or is just another attempt destined to be forgotten in the months to come.

Like its previous slates, the Japanese conglomerate has definitely put a lot of thought into the form factor. The device features the same OmniBalance design language as the flagship smartphone, but with a sensible twist. Instead of a full glass body which makes it a slippery fellow to hold, the rear panel has been crafted from polycarbonate and is given a a soft-touch finish, much like the ZL variant. Nevertheless, IPX5/7 water-proof characteristics and IP5X dusts-resistance are still present, making the device submergible for up to 30 minutes under water at a depth of 1 meter max. 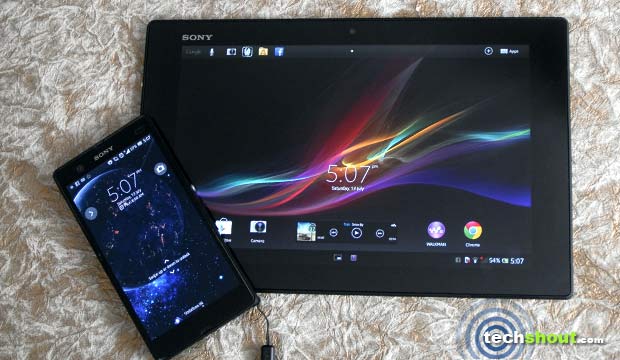 Sticking to the blueprint, the sides are coated with glass inlays and you’ll also have to deal with the annoying, yet reliable flaps on the Sony Xperia Tablet Z for accessing ports. These coverings ensure that no liquid seeps through and yes, they work as advertised, if that’s what you’re pondering about. The device on a whole has a very minimalistic appearance and the credit for that would go to the flaps as every socket has been neatly sealed off. Well, there are a few components that are visible. They include the volume rocker which is on the left along with the aluminum power button and gold contacts for charging while docked. 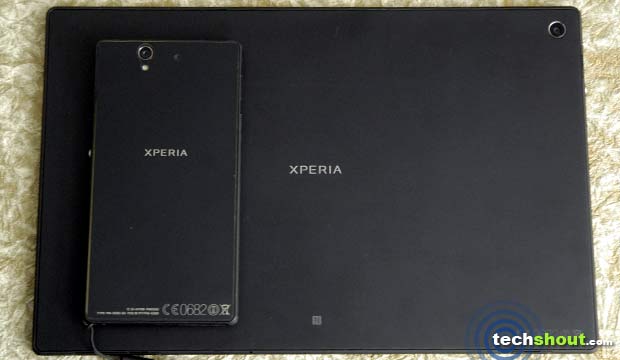 The conglomerate has even thrown in 4 stereo speakers, 2 on the side and 2 on the bottom. Hidden under the flaps, you’ll find the 3.5mm audio jack on the left, while the SIM tray, the microSD card slot and the microUSB port are located below. Where portability is concerned, the device is one of the most lightweight 10.1-inch slates we’ve operated. It weighs 495 grams and is unbelievably thin as well, slimmer than its smartphone counterpart, at 6.9mm. Accompanying the display on the front is a 1080p webcam, while the rear sports an 8.1MP camera and an NFC label. 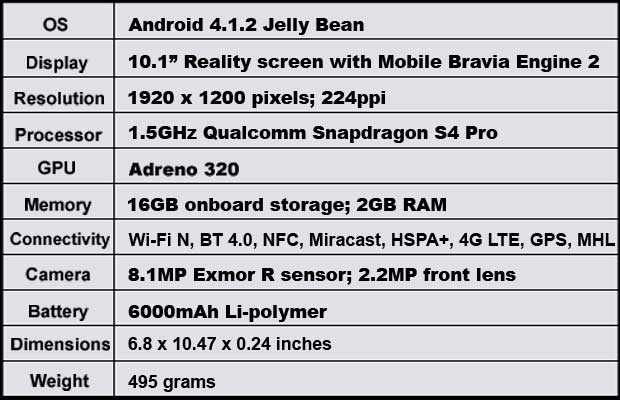 While most slates rock 1080p displays, this one from Sony proffers WUXGA 1920 x 1200-pixel resolution. Well, it’s nowhere near to the resolution of the iPad’s Retina display or the 2560 x 1600p panel on the Nexus 10, albeit the current resolution is good enough to deliver an immersive visual experience. With a 230ppi pixel density, visuals are brilliant and the viewing angles are pretty great too. While the display is certainly one to be enjoyed, the software implementation limits videos, games and apps from occupying the entire screen. The annoying bit here is that the navigation bar on the bottom remains persistent at all times, even through the icons and notifications are blanked out, leaving you with an unused patch on the bottom. 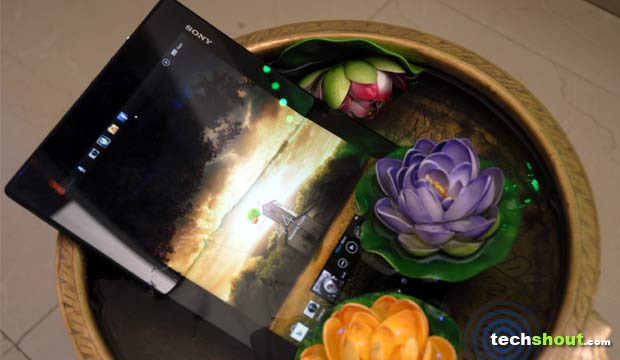 The Sony Xperia Tablet Z comes with an 8.1MP primary camera which is pretty much the highest you’d get on a slate form factor. The sensor employed here is an Exmor R for mobile and not the RS version which is found on the flagship smartphone, albeit it does support HDR for images as well as videos. And as per standard practice, there’s a front-facing webcam as well, with 1080p support. Images clicked by the rear lens on Superior Auto mode turned up quite decent. The color reproduction was good, albeit we did notice a bit of noise even in pictures captured in well-lit conditions. Videos recorded in 1080p are pretty smooth, but unless you have a perfectly steady hand, you’ll have to deal with slight shakes. What’s missing here is a flash on the rear which would definitely help the snapper from struggling in low-light situations.

At the time of writing this review, the slate was still on Android 4.1 Jelly Bean. Well, version 4.2 has already been certified for the device and it should arrive shortly. The flagship smartphone on the other hand, has already been bumped up to the latest Android revision carrying enhanced features which we anticipate will arrive on this slab as well. The interface isn’t much different from the smartphone version, but various adjustments have been made to it for making the best use of the large display. 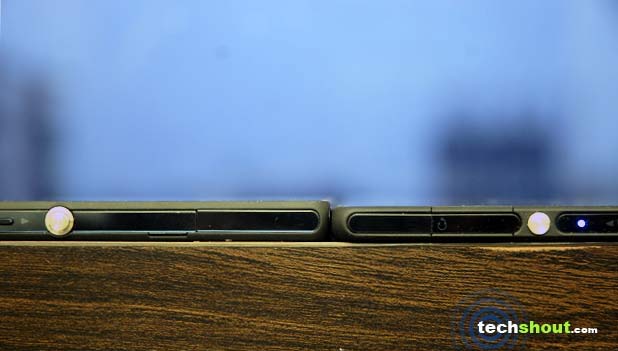 Besides the Google search box on the top left corner, you’ll find a customizable quick launch panel which allows you to conveniently access important applications. The widget-sized Small Apps which is one of the highlighted traits of the flagship smartphone have been implemented here as well. And instead of being listed on the recent apps UI, they’ve received a dedicated panel for fast launching. Well, the fact that you can run only one mini app at a time is a letdown, but we were quite fond of the ability of transforming most widgets into a floating window.

A little heads-up – Like most slates with cellular support, you won’t be able to make calls or receive and reply to messages sent to your SIM. Well, there is a workaround for the SMS part as downloading a third-party messaging tool (Go SMS Pro works well for us) seems to do the trick. Apart from these, you’ll get the usual standard applications like Walkman, Movies, Albums and the Sony Unlimited suite of services. Like the previous generation slate from the company, this one sports an IR blaster as well, allowing you to gain control of most entertainment systems around the house from a single place. 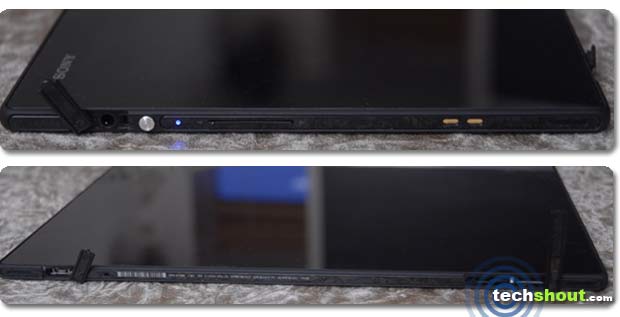 What else? Well, there’s support for wireless PS3 controllers, a remote application for the IR blaster and the Xperia Link app which allows you to access the internet on the slate via a smartphone. You’ll also be treated to Miracast wireless streaming which is being offered by Google on Android 4.2.2 Jelly Bean as default, but is dependent on whether OEMs want to incorporate it or not. 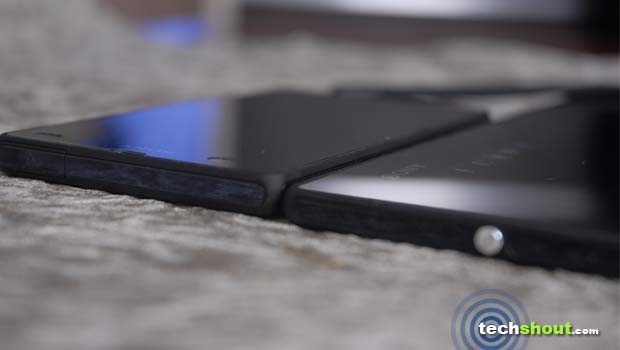 Usually, Android devices vibrate on pressing the power button when booting from cold. This slate, however, takes a little more time than usual for the Sony logo to appear, which at times got us believing that the device had failed on us and is refusing to start. This aside, the slate has got way too much oomph than required for Android to make the most out of. And even the toughest of games like NFC Most Wanted, Real Racing 3, GTA VC and Shadow Gun show no sign of struggle. With the water-resistance, there’s just one bit of complaint we’ve got apart from the annoyance of opening and closing the flaps – The speakers go soft and they take awhile to get back to normal. Also, all flaps need to be closed to avoid liquid damage.

Now, let’s see how the Sony Xperia Tablet Z does in benchmark test 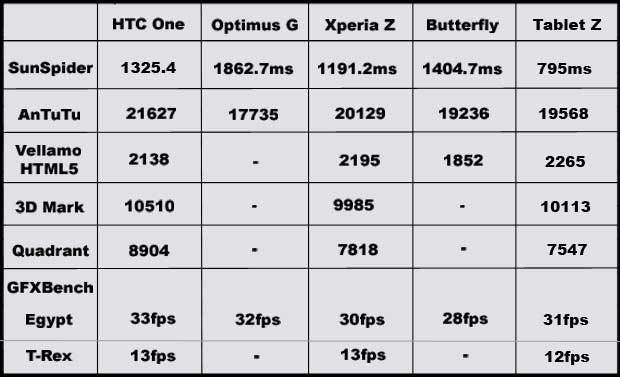 While the hardware components are top-notch and benchmark results are worth drooling over, the battery doesn’t fail to impress as well. With a capacity of 6000mAh, the slate can deliver over 2 days of usage with basic activities. Based on our performance tests, we can conclude that a single charge can deliver around 6.5 hours of gaming or up to 10 hours of HD video playback which puts the device in pretty good position against the competition. 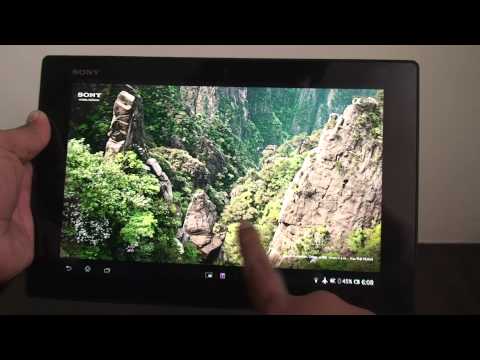 The device is great for entertainment – It’s got a beautiful display, a smooth UI and many usable features.

For a tablet, an 8.1MP camera is pretty much the highest you’ll find, and this Exmor R sensor doesn’t disappoint.

While the flaps are quite sturdy in design, frequently opening and closing them can get a bit on the nerves, especially if you’re trying to be extra careful.

A flash would go well with the rear-facing camera. And it’s a bit annoying that the entire screen doesn’t get used for video playback or gaming as the navigation bar on the bottom gets faded away, but is still present.

The Sony Xperia Tablet Z is definitely worth the money – It has a perfect balance of power and battery life as well as comes with rich features and not to forget, a gorgeous display. The water- and dust-resistant form factor keeps your mind at easy when using the slate outdoors and you’ll have options of 4G LTE or HSPA+ connectivity. In brief, it’s an entire entertainment package delivered through an incredibly slim and lightweight form factor. What’s left to say? Well, this piece hardware deserves a 4.5 out of 5 rating. You can pick up the Wi-Fi 16GB version in the US for $499.99, while the HSPA+ variant can be picked up in India for around Rs 43,990.