Sony Xperia Tablet Z up for pre-order in India for Rs 44,990 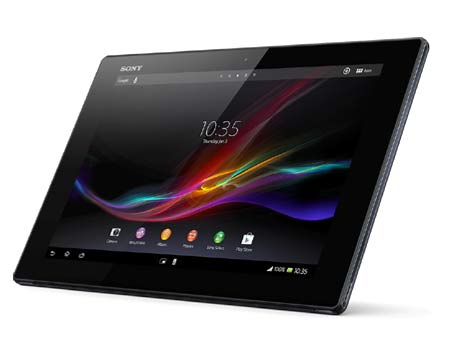 A 10.1-inch gadget by Sony, dubbed the Xperia Tablet Z, can now be seen slapped with a steep Rs 44,990 price in India and this has taken place around three months after it saw the crack of dawn through the MWC 2013. Even though it hasn’t entirely hit availability status, interested folks can still call dibs on the slab by pre-ordering it through multiple e-retailers across the country.

Those who have been monitoring the journey of the device will know that it is has a lot to offer. Let’s take the integrated 10.1-inch Reality display for instance. Employing Mobile Bravia Engine 2 technology, this touchscreen possesses a knack to roll out visuals at a resolution of 1920 x 1200 pixels. In spite of bearing a pretty large monitor, the profile has been sculpted to stretch only 6.9mm in thickness. 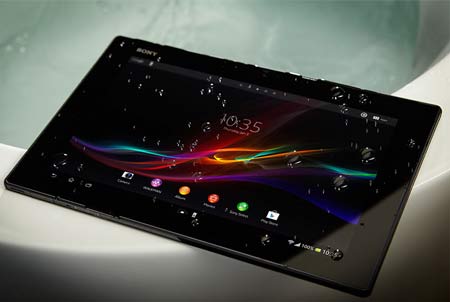 Sony’s recent interest in crafting water- and dust-proof gadgets has been extended to the tablet as well. Flaunting the IP55 and IP57 certification, it should be capable of surviving for up to half an hour when dipped in less than 1 meter-deep water. It is moreover said to withstand water jets and scrapes through dusty conditions too.

Considering that the front panel of the Tablet Z comes with a durable tempered glass and an anti-shatter film, people with an adventurous bone might even find it to be an ideal companion. A 6,000mAh battery and a 1.5GHz quad core Qualcomm Snapdragon processor, backed by 2GB of RAM power up the Android gadget’s functions. 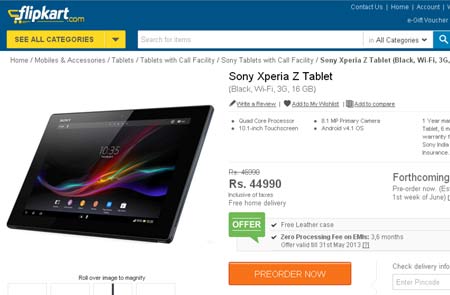 An 8.1MP primary camera featuring Exmor R CMOS sensor, touch focus and 16x digital zoom caters to users’ imaging needs. And people can rely on the embedded microSD card slot for expansions of up to 64GB, in the event that they find themselves demanding extra hoarding space over the inbuilt storage capacity of 16GB.

So far the Tablet Z has only been pegged with a tag and nothing has been said about its official availability. But certain online portals have managed to give us a fair idea regarding the arrival of the first stock. While Flipkart has only mentioned the first week of June as the launch window, Infibeam has gone ahead and revealed that the slab will be on sale by June 3. Fans who cannot wait until then will find the Sony device stashed with Snapdeal at present.

Specifications of the Xperia Tablet Z: