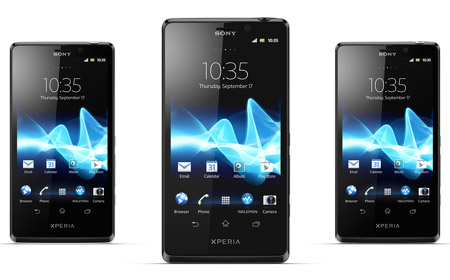 At a press event at IFA, the Sony Xperia T, Xperia V and Xperia J have been announced, amidst so many other reveals in the run up to the consumer electronics show. The biggest of the triplets, the T is set to be the series’ new global flagship model with one-touch NFC connectivity, but all come with ICS while an upgrade to Jelly Bean will be provided post-launch.

The PlayStation certified Xperia T will also be called the Xperia TX in some markets, and features a capacitive 4.55-inch 1280 x 720p display, an AF 13MP camera with LED flash capable of full 1080p recording and a ‘720p HD’ front cam. Its dual core 1.5GHz Qualcomm Krait processor is backed up by 1GB of RAM and about 16GB of internal storage, expandable up to 32GB via a microSD card. It can be connected to an HDMI-enabled TV to view photos and videos on a larger screen and will be available in 3 colors – black, silver and white.

The Xperia V comes with a capacitive 4.3-inch 1280 x 720p TFT touchscreen display, a 13MP camera with autofocus, again capable of recording in 1080p, and a VGA front snapper. It features a 1.5GHz Qualcomm dual core processor which receives support from 1GB of RAM. Internal storage is approximately 8GB and users can expand up to 32GB. It will come in black, white and pink color options.

The Xperia J is the baby on the list with its 4-inch 854 x 480p capacitive TFT display. Unlike its heftier siblings, it only gets a 5MP clicker with autofocus and LED flash, and a VGA front camera, but that’s just as well since it has been designed to combine style with affordability. The Qualcomm processor it utilizes runs at 1GHz, and 512MB of RAM is packed under the hood. Internal memory amounts to about 4GB but can be expanded up to 32GB. It will be made available in black, white, pink and gold. 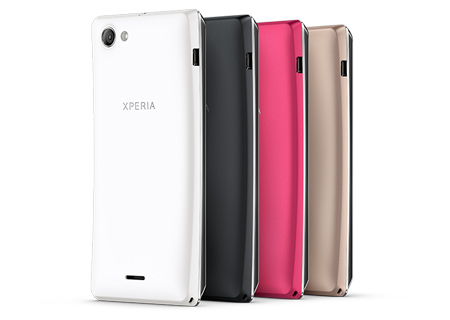 The Xperia T’s release date is scheduled for a few weeks time globally, while the Sony Xperia V and Xperia J are set to launch around the world sometime in Q4 2012. Pricing details haven’t been divulged yet.