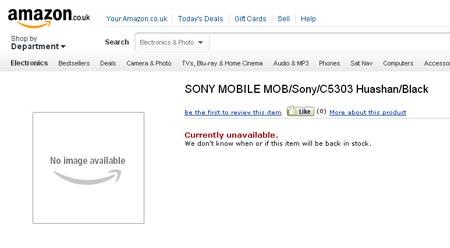 Price information about the rumored Sony Xperia SP and Xperia L has leaked out thanks to a goof up on the part of some UK retailers, revealing that these two devices could be slated to start selling at £312.98 and £219, respectively. The devices have been in cloaked in secrecy for a long time now, but that hasn’t managed to stop the various leaks that have been giving away details of their existences every now and then.

Both the phones, the SP and L are being listed by certain sellers in the United Kingdom that include Amazon, eBuyer and LambdaTek, as spotted by the unofficial Xperia blog. While the former model is codenamed HuaShan, the latter has been tagged with the Taoshan tag. These listings have mentioned that each of the devices will be available in black as well as white color options. Their specifications however have been withheld by the retailers, leaving us to look at the ones that have been leaked in the past.

As far as the SP model is concerned, it is expected to have been affixed with a 4.55-inch display that could throw its visuals out with a resolution of 720p. Also known by its model number, C5303, this handset has apparently been dressed in an aluminum frame. As is being speculated, a 1.7GHz dual core Qualcomm Snapdragon S4 Pro processor has been granted to it along with Adreno 320 graphics. Furthermore, an 8MP Exmor RS camera and 8GB of internal storage are some of its other purported offerings.

And then there’s the L handset which supposedly carries on it a smaller 4.3-inch FWVGA screen with a resolution of 480 x 854. Its processor is said to be a dual core Qualcomm Snapdragon one clocked at 1GHz. And apart from Adreno 305 graphics, an 8MP Exmor RS camera sensor, 8GB of internal storage and a 1700mAh battery have also been infused into it, say reports.

As far as the launch details of both devices are concerned, we’re quite unsure about them. One of the above mentioned retailers has mentioned that it expects stocks of the product to arrive at its doorsteps on March 19, but an Irish seller named Micro Aid on the other hand, has revealed March 12 (today) to be the due date. We’ll have more about these handsets when additional concrete details about them are out.