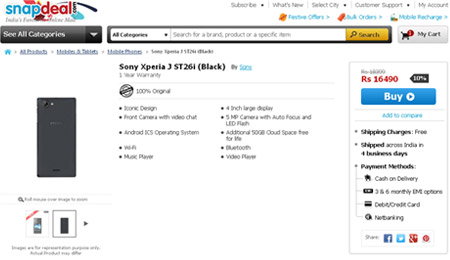 The Sony Xperia J price in India has surfaced through various e-retailers and the phone has already hit availability status. This mid-range Android handset treats users to the Ice Cream Sandwich platform and takes advantage of a dual core processor.

The proud owner of a 4-inch capacitive TFT FWVGA multi-touch screen, the Xperia phone claims to render clear visuals in 480 x 854p resolution. Powered by Mobile Bravia engine, this scratch-resistant touchscreen comes with a Corning Gorilla Glass coating. A 1GHz Qualcomm Snapdragon chipset and 512MB of RAM should make this device capable of carrying out multiple tasks at the same time.

Measuring 124.3 x 61.2 x 9.2 millimeters and weighing approximately 130 grams, the Xperia J supports dual cameras on its sleek chassis. A 5MP snapper with features like LED flash, auto focus, geo-tagging, self timer, image stabilizer, digital zoom, video recording capability and more lays claim over the back panel. Its front side is embedded with a 0.3MP webcam to facilitate video calling on the move.

This handset ships with merely 4GB of integrated memory, but there’s an expansion slot to increase its storage by up to 32GB with a little assistance from a microSD card. Moreover, the Android-based smartphone draws power from a 1700mAh lithium-ion battery and claims to cough up the juice for talk time of about 5 hours and 7 hours in the 2G and 3G mode, respectively. 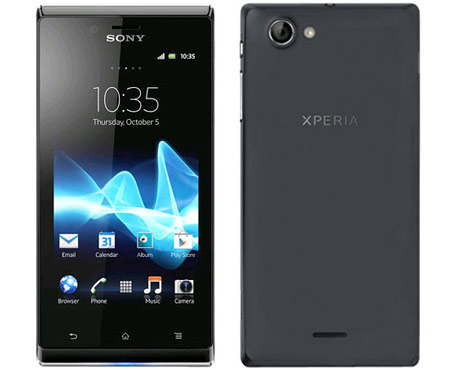 The Sony Xperia J price in India is Rs. 16,490 and it can now be picked up from e-retailers like Snapdeal, Infibeam, Flipkart and more.