There’s a little less than a month left for the Sony Xperia i1 Honami to go official and rumors are in full swing. And while we’ve learnt almost everything there is to know about the upcoming Sony flagship, a new revelation has shown us the possible teaser which the company might release in the weeks to come. Now, things like these can be easily faked, but there appears to a good level of legitimacy behind the leak. Well, we’d still recommend a good pinch salt through.

The teaser image which is seen below was uploaded by Digi-Wo and the guys over at Xperia Blog have snooped around a little to reveal more information. Zooming into certain areas, they’ve managed to disclose that the Sony Xperia i1 Honami will have the signature power button which is present on most 2013 handsets, and the presence of a flap denotes that the flagship will feature water-resistant capabilities as well. It could arrive with materials other the one used for crafting the Xperia Z’s frame. Nevertheless, the report does note that the phone shown in the teaser image appears to be slightly different than the device we’ve seen leak last month. 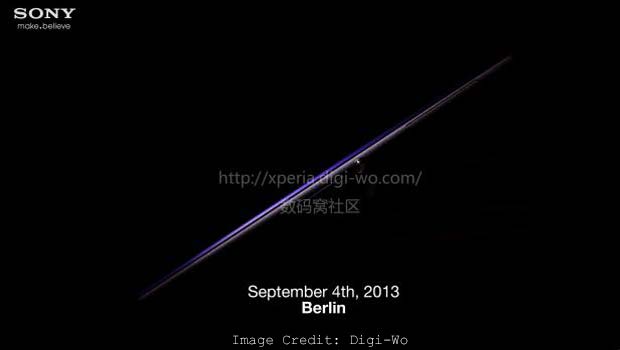 When sized up against the current flagship, the Sony Xperia i1 Honami is slightly on the taller side, but is almost identical to the former in appearance. Specifications-wise, the device will pack a Snapdragon 800 CPU, 2GB of RAM, a 3000mAh battery, a 20MP G-lens and a 5-inch FHD Triluminos display with X-Reality for Mobile.

Apart from showing a small portion of the Sony Xperia i1 Honami, the teaser has ‘September 4, 2013’ printed on it. This is the same date when the smartphone is expected to go official in Berlin.