The Sony Xperia Z4 lineup is already pretty crowded with the many leaks on multiple devices and it looks like there could be another version of the flagship destined for launch at the MWC 2015, the Xperia Z4 Music. This gadget will also carry the Walkman branding with many features aimed at audiophiles.

Chinese website iGeek is the source of the information on the Sony Xperia Z4 Music and it notes that the device appeared on the company’s website, or so the translation indicates. An image of the device which is embedded below has also been leaked along with a detailed look at the specs. 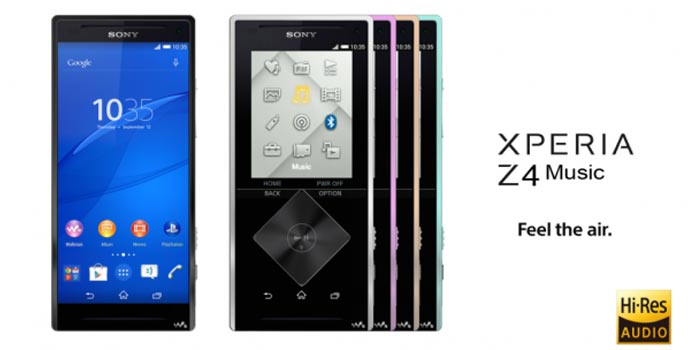 The Xperia Z4 Music will feature a 4-inch 720p HD display and gain steam from a 2.3GHz quad core Snapdragon 801 SOC with 3GB of RAM. It’ll also have a 2000mAh battery and options of 32GB or 128GB internal storage. Sony might even throw in S-Force PRO front-facing speakers as is visible in the image above.

Now, while the information provided here looks legit, there’s just one small thing that doesn’t fit. The device’s interface hints that there will be cellular support, but there’s no mention of such in the specifications. And why would Sony offer SIM-based connectivity on a media player?

It’s certainly a possibility, but it’s unlikely that will happen. Also, the gadget looks to be running an older version of Android which is no surprise as even the recently launched $1200 Walkman comes with Jelly Bean.

The Sony Xperia Z4 Music is expected to make its debut at the MWC 2015 in March. Be sure to hit up the source link for more information on the device.