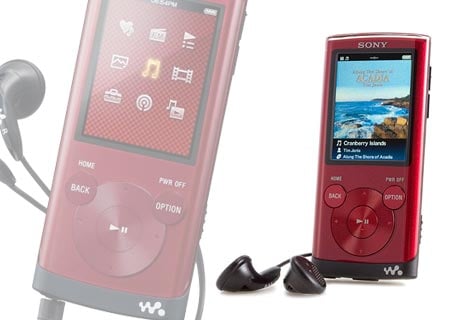 Sony believes that ‘Every moment has its music’ and rightly so, we see that each precious instance of life has its own scenarios and moods to fit the situation. To aptly compliment every one of those flashes, the company has rolled out the Sony Walkman NWZ-E353 media player. We acquired the one that was drenched in rose-red rouge and matte black plastic back panel although this beauty can also be procured from the market dressed in complete black. All set with our review piece, we prepared ourselves to be blown away by the aural and visual pleasure the company claimed to provide.

The offering was packaged neatly enough to be presented without the pretty wrapping under a Christmas tree. The device along with the earphones was exposed behind a plastic case that was easily ripped apart by our eager hands. Within the confines of the box, we also found a USB cable, Quick Start guide and Warranty card. We immediately attached the USB cable into the computer in order to charge the li-ion rechargeable battery to its full capacity for hours of grooving that was predicted to follow. However, while the player was being charged and paired with the PC or laptop, it could not be physically operated. So while the juices continue to flow into the device we move on to explain the outer features and buttons that adorn its circumference.

Occupying nearly half the device is the 5.1cm TFT color display complete with QVGA 240 x 320 pixels and LED-backlight. Although not of the touchscreen sort, clear was the screen it offered and bright was the smile that danced upon our faces. Heading south we find a bunch of buttons that looked anything but a clutter and seemed to be well-integrated into the system. Atop the larger circle that sat in the middle were a pair of two smaller orbs, the Back/Home button and Option/ Power Off for accessing the option menu and switching off the screen or letting the player enter stand-by mode when long-pressed. The navigation buttons did their duty by sitting on the larger circle with the play/pause/confirm button conveniently placed in the middle.

You can toggle the volume and access the hold switch from the right side of the device. The other side was left untouched which was an asset as it could then be easily wielded in the palm of the hand without having to worry about hitting the other buttons while operating the system. The edge down under housed the headphone jack, USB connector and strap hold to see that your device securely stays in your hands if you have the urge to get on your feet and groove to the music. Flipping it over on its underbelly was the reset button along with the iconic W logo. But the slapping on of the logo did not just end there as the front right-hand corner too was littered with it while the Sony name could be read across the top.

Setting up our device was a breeze as we simply had to follow the on-screen instructions and voila, we could stuff this tech turkey with various type of delicious herbs such as music, videos and pictures. Tackling the audio aspect first, this device can recognize MP3, AAC, WMA and Linear PCM files. As far as video is concerned only WMV files can be played which was a bit of a hassle as we had to convert all our files into the same format. The device can even be used as a transporter or portable USB drive to transfer data which may not be playable through the media. While playing movies, you can pause and resume from where you left off when you are interrupted while trying to get into a crowded bus or train. Photos in JPG could be easily viewed through the player. Although you cannot zoom into the pictures, detailed information, set as wallpaper and brightness can be accessed. 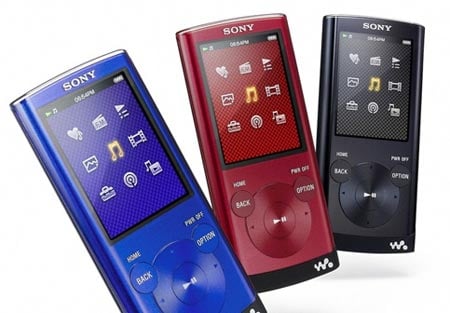 The sound quality and volume level are some of the highlights this gadget boasts about and deserve a segment of their own. Whether it’s watching a movie or listening to music, they all can be enjoyed with pristine quality. The volume levels are great unlike those that have a limited increase margin. The AVLS can however be amended through settings. Besides pairing the product with the provided earphones (which are awesome as well), you can attach any good pair of headphones in order to enjoy the audio bliss belted through the beauty. There are also various options that help tweak the type of music quality you want to hear such as Heavy, Pop, Jazz, Unique and even two custom options for you to put your own spin. The commendable battery life also compliments the actions you’re able to carry out through the device. It took us just three hours to charge but offered us a sizable amount of audio and video playback. We only had to search for the USB cord after nearly two days of playing.

Besides the above features, Sony also embeds its entertainment solution with other attributes. One of them includes Sony’s SenseMe technology and a new user interface that harbors ‘Scene Scroll’ and ‘Album Scroll’ for seamless and quick navigation through your songs. The device however lacks a touchscreen or even a touch-sensitive jog dial. If your playlist gets a bit too dreary then the FM is a good option to exploit. It scanned and saved all the available stations in a jiffy. The player also supports an alarm but is of no use if you want to awaken to it. The alarm does not ring aloud as the device does not include built-in speakers. It is however good for alerting if you get too lost into a movie. The Sony Walkman NWZ-E353 player is a great gift for Karaoke enthusiasts as it supports language learning and Karaoke functions while offering much more options that meet the eye or ear.

The company has blessed this delight with a sleek appearance and lightweight nature that won’t burden your hand or pocket.

Talking about being a burden, well it has a small appetite as far as eating right through your pocket is concerned.

Besides catering to you aural and visual needs, it also comes packed with various innovative features.

The pristine sound clarity obtained is one of the main aspects of this player.

The Walkman could have entered the markets with a wider range of hues and a couple of brighter shades too wouldn’t have hurt anyone.

It would have been great if Sony integrated a pair of speakers into the product.

The device could have supported other formats as well such as MP4 and .Avi, among others.

We kept hitting the option button whenever we wanted to return to the previous page as the back button was located on the left. We guess this was the prolonged mobile phone-using syndrome.

The Walkman brand from Sony has captivated audiophiles for a long time now. We still remember back in the day when the Sony Walkman Cassette player kept us company while getting through those lonely times. Proving its worth once again as an ideal companion, the Sony Walkman NWZ-E353 offers battery-life goodness, laudable features and an appealing appearance that completes the whole package. You can immediately dig into the device without needing to read the manual as all the actions are self-explanatory. We give this Sony entrant a 8.7 out of 10. They say each lifetime is a complete onstage musical with various acts that boast of melodramatic scenes so why not add a soundtrack to it every step of the way?