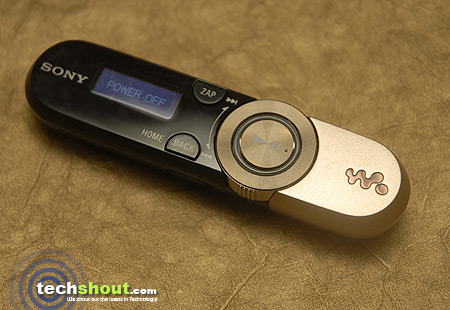 One wouldn’t be surprised to see numerous ears plugged with earphones, grooving to those scintillating tunes when on the move. The players ruling the MP3 arena have geared up to provide audio solution distinct from the others, offering consumers a myriad of choices. From Apple’s ‘i’ devices to several other MP3 players, manufacturers have been rushing with either a timely tweak or a new product altogether. Among the varying moulds which cast a distinguished look to each MP3 player, Sony decided to stick to the good ‘ol USB stick form. Well, we are talking about the Sony Walkman NWZ-B152F which is all set to put to test its rhythmic abilities as we jot down this comprehensive review.

Packaged in a box that let us sneak-peek through a transparent covering, the device lay sporting a stylish look in subtle golden shades. On pulling out the device, the in-box contents accompanying the NWZ-B152F were headphones, a warranty card and a user manual. Evidently, the swanky player wouldn’t occupy much space in pockets, purses or bags with its 90.9mm x 23.3mm x 15.2mm stick-type design. Though, the built-in USB form factor isn’t a new concept, Sony has filled the contemporary-dent with a jog wheel that replaces the four-way navigation button. The 2GB unit we received is a mix of black and golden and the color-combo exudes a sophisticated look. The jog wheel and the cap that secures the USB connector are drenched in sober gold (not flashy at all) while the rest of the device maintains the black hue. The golden shade gets a matte finish on the plastic cap while the jog wheel shines in metallic gold. Do pay an added attention to the plastic cap as losing it would not only take the protective cloak off the USB connector but also knock away its style quotient.

The jog wheel took us back to the geometry lessons in school, reminding about the circle of concern and influence. Interestingly, a circular section distinguishing the two circles has been integrated with LEDs. These LEDs emit red light as you switch on the player and flash clockwise on charging the device. The inner circle serves as play/pause/enter button whereas the outer wheel helps navigate through Menu, and also acts as rewind/forward button. The cap that can be detached from the right of the circular edge is marked with the Walkman logo while the left section posing in black has been imprinted with white lettered Sony alongside monochrome LCD screen, and Back and Zap (for Zappin function) buttons. The recording button, dedicated volume controls, play mode/bass and hold switch settle on its edges while mic and reset have been integrated on its rear portion. Long press the bass button and it acts as the shortcut to mode selector while one would require a sharp thin pin to reset the device. 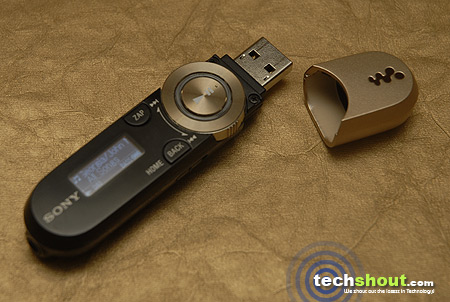 The tiny screen does its job well in almost all light conditions. The interface has been maintained simple with four Menu icons – Voice, Music library, FM and Settings. They can be easily arranged in multiple folders, enabling simplified access. A notable aspect of the player is its USB connector integrated design that allows charging on-the-go. The PC/laptop instantly recognizes the player as a USB drive, allowing users to save music files by a simple drag and drop method. With support for MP3 and playback, the playlist option did not allow us to compose one while traveling. Disappointingly, the playlist can be transferred onto the B152F by creating it in Windows Media player.

As aforementioned, the Zap button embedded on the front face of the player activates the Zappin feature. This feature brings short samples of each song from the user’s music collection for easier browsing. This is usually helpful in music players without a screen. However, the feature could be convenient for those who prefer not to peep into the minute screen all the time.

Coming to the prime aspect of the device, Yes! music, music and music. The audio quality seems good and the bass boost option works fine too. Moreover, on enabling bass, the LED illuminates rhythmically in tune with the song being played. We could clearly listen to the music even while brisking through streets, amidst crowd and honking horns. However, we tried using the Sony player with Sennheiser headphones and it responded pretty well, in fact the music quality sounded much better. Though the Sony player garners a pat on the back for the audio quality, the company could have bundled better headphones. The company has done a great job with the audibility levels as well.

The outfitted recorder functionality was put to test by recording a few clips. Somehow, it wasn’t effective and didn’t manage to capture multiple voices effectively. Plus, the recorder button and the volume controls placed closely beside each other were troublesome as we accidently pressed the recorder button. Fortunately, the recorder asks for permission before it starts recording and does not do it right away.

Music players these days ensure to include the FM functionality and this Sony player is no different. The FM reception is decent and so is the overall performance. Well, FM functionality stops at this, no FM recording or any out-of-the-box user experience. This bit could have also been enhanced by the company. 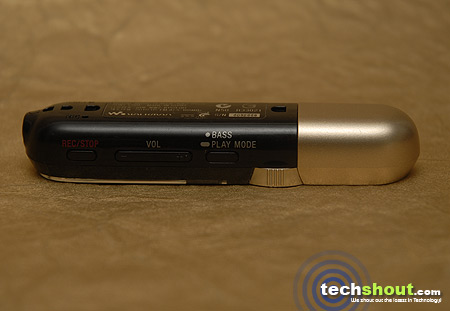 It took a little over an hour to completely charge the Sony Walkman NWZ-B152F while we could also opt for the Quick Charge function that enables listening to 90 minutes of music with a 3 minute charge. With manufacturers trying to push in devices that can squeeze in playback time up to a day, this device fails to keep up with the ability. It managed to offer up to 18 hours of music as stated by the company. However, when used with all its functionalities, the battery life lessened to a great extent.

Under settings, we could tweak Music, FM and other attributes. Apart from the shortcut for Play mode, we could also adjust it through settings. The Equalizer and Zappin range was be adjusted as well. The recorder lets one opt for High, Mid or Low option while the contrast can be adjusted as well. You can also opt to disable the LED and choose from power save modes.

Keeping the music quality in mind, this MP3 could suit every musical pocket as it does its job well. The boost function further strengthens listening experience.

The integrated LED light effect clearly distinguishes the device from other MP3 players.

The simple interface adds to the convenience while the inclusion of folder options and drag-drop functionality further elevate the usage.

If the B152F runs out of power then simply connect it to one of those laptop USB ports and its ready to let out your favorite tunes.

Zappin is a good feature to incorporate into devices without a screen, somehow we felt the company could have worked on a more beneficial function than this one.

The USB cap forms a prime factor of the device design and seemingly one would have to be careful about not losing it. This could take away the charm of its sophisticated looks and also leave the connector unprotected.

The included earphones could have been better.

Sony should have squeezed in some more useful features into the device.

Weighing the highs and lows, the player manages to appear good at what it’s aimed to be. The music quality is good and you can grove to clear, crisp tunes even on-the-go. A few features come across unnecessary while the inclusion of a few others could have firmed its footmark in the music arena. All in all, the Sony Walkman NWZ-B152F can be clutched by on-the-move music lovers. It gets a rating of 8 out of 10 from us. Sony has attached a price tag of Rs. 2899 to this music player.