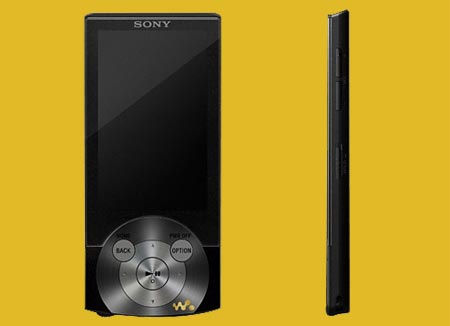 Sony Walkman players often tread tech lanes to rouse the music flea within consumers. The company is well acquainted with the most recent market demands and needs. The performance-hogging characteristics set that allures users surely includes a slim design to dote upon. Precisely, we are talking about the Sony Walkman NWZ-A845 music player. To know if Sony has chosen the right path with the incorporated design and features, we have tossed it in our tech labs to lay out this comprehensive review.

We received the Sony player in a packaging that showcased the device through a transparent sheath. The Sony NWZ-A845 was packed along with Sony MDR-NC033 noise canceling earphones, small, medium and large eartips, USB data cable, external input cable with airplane adaptor, bundle of booklets, and an adaptor for sound docks. On unboxing the device, what lay in our hands is the slim A845. At 7.2mm, the sleekness of the device is appreciable and could stand alongside the weight-shedding Apple music players. The NWZ-A845 is a 16GB unit drenched only in black hue.

The front side of the music player has been embedded with a 2.8-inch widescreen display while the controls seamlessly integrate with the body just below the screen. Fashioned in a circular manner with the lower section cut, four-way navigation (volume and rewind/forward included), play/pause and back and power/options buttons have been integrated in the device. The volume controls and hold button run along its right edge while the lower edge shows off a 3.5mm port and a mini USB port.

Apart from the steel navigational circular controls, the Sony Walkman NWZ-A845 has been crafted of metal with an all black matte finish. This has helped to add ruggedness to the device and give it a solid feel. The entire surface of the player including the screen is a fingerprint magnet and attracts impressions quickly. So, get ready for a frequent screen cleaning spree.

At a glance, the 2.8-inch screen could be mistaken to feature touchscreen ability but disappointingly the device comes minus it. Well, it’s not that Sony hasn’t emerged with touchscreen music players. However, they are yet to hit Indian store shelves. Nevertheless, this is Sony’s first player in India to embed OLED display. The screen chucks in 400 x 240 pixel resolution for a clear viewing experience. The image quality turned out to be impressive, be it menu icons, photos or videos. Of course, one would always feel the pinch of a small screen but we felt the device packs in a power punch for its size. The viewing experience is rather realistic and maintains natural colors along with flexible viewing angles. These attributes however faded off as we moved out of our adobe in the brightness of sunlight. The NWZ-A845 isn’t completely sunlight viewable.

Sony has incorporated the usual user interface seen in most of the players. It is a 3 x 3 matrix formed of Video playback, FM radio, Noise Canceling, Photos, Music, Videos, Settings, podcasts, and song playback. The music icon let us browse by genre, artist, album and so on. The Option button plays a vital role by letting users choose between Title & Cover Art and Cover Art Only. The option button also pops up the ‘To playback screen’ when anywhere in the Music region.

On playing a particular music track, the album art is seen right in the middle of the screen while above it the details of the song are displayed. Here again, you can adjust attributes such as play mode, playback range, language learning mode, DPC, equalizer and add to the wishlist. The zoom settings include auto, full and off options while brightness can be tweaked alongside viewing detailed information and ability to delete a video. 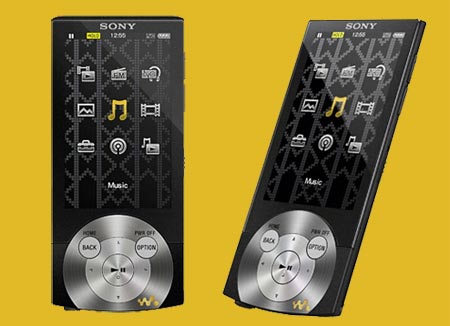 Seemingly, the Sony Walkman does pack in some interesting features as listed out. Moreover, what glued us to the screen is its yet another functionality that can repeatedly emit a particular part of the song on marking its start and end point. This isn’t all, the speed at which it plays music can also be controlled by the player.

The Digital Sound Enhancement Engine can be activated or deactivated which further helps improve audio quality while the Clear Stereo function minimizes stereo crosstalk. The Dynamic Normalizer maintains a constant volume and we could also adjust a specific max volume for the player with the AVLS option. The Sony Clear Bass along with three intensity levels help make changes in each of the two blank presets. Furthermore, Virtual Phone Technology from Sony has been infused which almost succeeds in creating a surround effect with options such as Studio, Live, Club, Arena, Matrix and Karaoke. Karaoke seemed fun as we could sing in the background.

The included noise cancellation feature turned out quite useful, we tried the office option and did manage to keep away the sound but we could still hear sounds here and there. The bus/vehicle mode was quite impressive and it managed to engage us into music without any disturbance.

Furthermore, noise cancellation ability can be activated or deactivated depending upon your preference. The sensitivity of microphones can also be tweaked likewise. The input cable included with the device makes it possible to connect the device with other audio sources.

The impressive 16GB of memory let us save abundant music and video files. The Sony Walkman NWZ-A845 comes with the Folder option that let us add music, videos,photos and more by a simple drag and drop action. As we aren’t big fans of iTunes, we are always happy to see the drag-and-drop ability. The player did support WMA file format but refused to adhere to lossless formats such as FLAC. The video file format support turned out to another disappointing bit as we couldn’t play DivX files and all it supported were WMV, H.264 and MP4. Moreover, it does not support Xvid as well.

Talking about NWZ-A845’s rhythmic performance, we must say the music quality is good. The included earphones are pretty decent and come with noise cancelling microphones embedded within them. However, this strikes out the option of using other earphones. Moreover, the eartips didn’t offer us a snug fit. We also tried listening to music with our Sennheiser earphones and the music quality seemed elevated. With the earphones bundles with Sony, audiophiles may complaint at some point or another. The video viewing was again decent and the images looked good as well.

Sony has managed to load the device with ample of features but we wonder why the RDS support for FM radio went missing. Nevertheless, the reception and voice clarity have been well maintained. With an average usage, this Sony player managed to deliver more than 24 hours of music play.

The incorporated noise cancelling ability, specifically the bus/train mode, does its job well.

With the ability to view videos, we did expect a larger screen. This could further pep up the viewing experience.

The noise canceling microphone embedded within the earphones strikes off the option to replace them.

With tough completion posed by the market in the music player category, some of the missing attributes of the device could make users dig into options offered by other manufacturers. Nevertheless, the Sony Walkman NWZ-A845 still comes across as a stylish looking, feature-loaded music player with good audio quality. The player has grabbed a rating of 7 on 10 from us. It can be snapped for a price of Rs. 11,990.