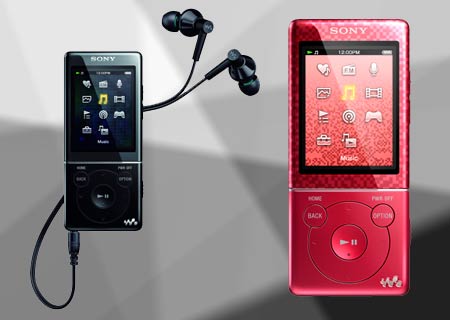 ‘Designed for music lovers, by music lovers,’ is how the Tokyo-based conglomerate defines its newly unveiled Sony Walkman F800 and E470 series of portable media players. The former comes bundled with exclusive digital audio fidelity technologies from Sony, while the latter is said to be the slimmest model in the Walkman range till date.

As we said earlier, the Walkman F800 flagship series packs in the S-Master digital amplifier combined with various other audio technologies to deliver a rich music experience. Running on the Android 4.0 platform, the device incorporates a wide range of pre-installed apps that comprise of email, maps and media gallery tools. Users will be able to navigate through menus via the multi-touch screen that spans 3.5 inches diagonally, while a dual core Tegra 2 processor from Nvidia aims to deliver an enhanced gaming experience. To top it off, there’s a ‘W’ button which allows users to conveniently jump to the music application from almost anywhere.

The new E470 series is said to be an ideal on-the-go companion for users. Measuring approximately 7mm thick, the device arrives dressed in 2 color options namely, metallic red and black, flaunting a 2-inch LCD display. This addition to the Walkman range isn’t all about music alone, the company has thrown in a host of features including a karaoke mode, synchronized lyrics and a couple of Tetris- and Sudoku-like games dubbed Puyo Pop Fever and Number Place. Both the aforementioned devices are accompanied by hybrid silicone premium earbud headphones.