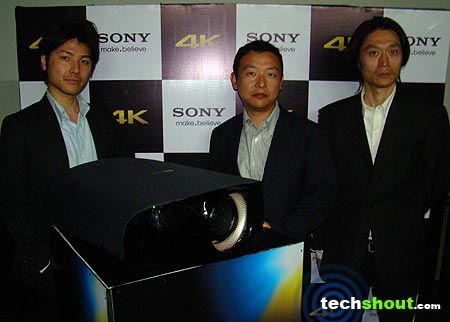 The Sony VPL-VW1000ES 4K home theater projector was unveiled today at an event held in Mumbai. Aiming to go beyond HD, this 3D-capable digital offering has the ability to produce 4K images. This means that entertainment enthusiasts as well as movie buffs can expect a visual experience that’s four times the resolution of full HD. The gadget in question sports a new 0.74-inch SXRD 4K panel for providing device contrast and 2,000 ANSI-lumens of brightness. A 1,000,000:1 dynamic contrast can also be achieved when the projector is combined with the company’s Iris3 technology.

Sony further claims that screen sizes of up to 200 inches diagonally can be obtained while viewing onscreen content. Apart from supporting 4K native resolution, the projector is also fitted with the company’s Super Resolution 4K upscaler ‘Reality Creation’ technology. Thanks to this neat inclusion, pictures splashed out in 2D or 3D and SD or HD get transformed into higher definition true 4K complete with a DCI format of 4096 x 2160p resolution. The device features other interesting attributes such as an integrated IR transmitter for achieving full 4K 3D that can be taken advantage of via the projector’s TDG-PJ1 USB-chargeable active shutter 3D glasses. 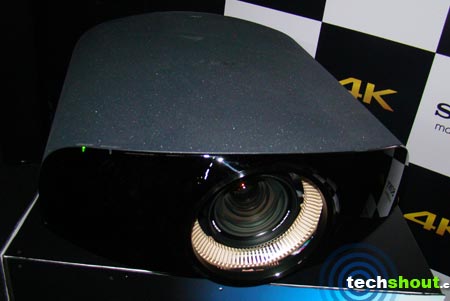 “Sony continues to push the boundaries of high resolution entertainment; from the lens to the living room. Our new VPL-VW1000ES 4K home theater projector has been created to not just meet, but exceed the needs of the most discerning and demanding home entertainment enthusiasts. It will allow them to become totally immersed in the viewing experience with the action unfolding before their eyes in a new level of realism, with colors and details unlike anything seen before in home entertainment,” commented Munetaka Satoru, Deputy General Manager, Professional Solution Division, Sony India.

The Sony VPL-VW1000ES 4K home theater projector has the ability to memorize the zoom lens position through the in-built picture position memory and even supports 2D and 3D anamorphic films. There is a plethora of installation options for potential buyers to avail of. These include 2.1 motorized zoom, an RS232 interface, dual triggers and expanded throw distances. At the event, the company showcased the 4K home theater projector by playing a few movie clips.

The Sony VPL-VW1000ES price in India reads at Rs. 13,99,900 and it is apparently aimed at cinema theater owners, directors, actors, doctors and other similar consumer niches in the country.