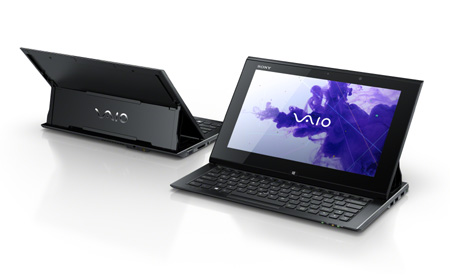 The Sony Vaio Duo 11 is an Ultrabook that can transform into a touchscreen tablet for convenience, thanks to its Surf Slider design. And while a hybrid laptop is not a completely new concept, the Sony device weighs just 1.3kg with the standard battery and is 17.85mm thick. It also lets users be precise while writing by hand, providing a digitizer stylus pen for the purpose.

The laptop comes with Windows 8 so that users can interact with media applications on the 29.4cm (11.6-inch) OptiContrast Panel, which is a full HD capacitive touchscreen, offering a maximum resolution of 1920 x 1080p. Powered by the latest generation of Intel Core processors, it comes with the choice of 4GB or 8GB DDR3L 1600MHz SDRAM and with an Intel HD Graphics 4000 chip, so that it doesn’t lack.

The Sony hybrid Ultrabook has also been designed to make for an ideal companion on the go. It powers up quickly and can be set to a power-saving sleep mode. A pressure-sensitive digitizer stylus is well suited to writing on the screen, and the company claims it experiences ‘imperceptible latency.’ There’s also an album and a music application adding to its versatility.

Even though the Duo 11 is slim and optimized for portable use, it can turn into a handy business solution thanks to several interface options which include Ethernet, USB 3.0, VGA video and HDMI out ports. It also offers Bluetooth connectivity and SSD storage choices of 128GB and 256GB. A memory expansion slot has also been provided, as have two webcams, one in the front and one on the rear.

The new Sony Vaio Duo 11 hybrid Ultrabook PC release date has been marked for the end of October 2012, but the Japanese conglomerate says country-specific release dates may vary slightly.