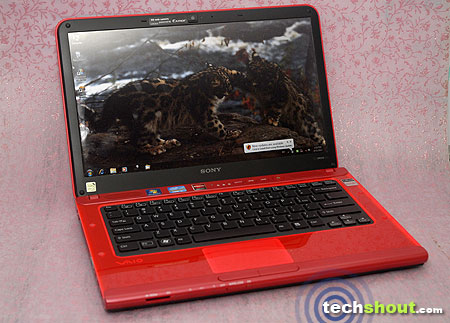 It’ll take some time getting used to, but neon is certainly not our favorite kind of shade on the Sony Vaio C series laptop we’re putting through a review. Neon is edgy, neon is fashionable. Sony was clearly trying to capture the neon and color blocking runway style with the C series notebooks in its various spirited hues. The only problem is, it rarely looks good off camera. But the pictures dotting this review hardly offer enough proof of that. There’s neon, a special light-emitting material that makes up the shell and a snazzy exterior-deck contrast. So where did they go wrong?

First off, the Vaio C commits the cardinal sin of not attempting to appear slim from any angle. And we live in a world where every other notebook is trying to be a MacBook Air or still skinnier than that. We get no such pretensions from this portable PC. It’s got the ‘neon’ and ‘color block’ well separated to offer you a block of neon color. That’s the Sony Vaio C for you. We unwrapped a review unit drenched in glowing red which seemed pretty nice at first glimpse. Until we lifted it open to reveal the deck. 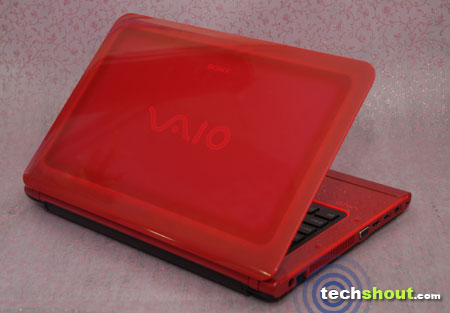 The view from the top shows an attractive luminescent red lid and when you open the notebook and the same color flows onto the entire deck area too. All of this is set off sharply against a black bezel and a black keyboard to match what else, but the black rear cover. It’s a risky move which you’ll either like or hate. There’s too much of a plasticky feel about the surface to not have us thinking about over-sized toys for kids. And the various holes cut out for four USB ports, an HDMI terminal, an A/V jack, air vents, power, LAN and VGA interrupt the construct rather rudely from the visual aspect.

On the entertainment front, the Sony Vaio C Series reels out pictures in anything between 1,366 x 768p and 800 x 600p resolutions on its 14” screen. HD videos play out just fine without any stuttering and the backlit display is viewable from all angles quite clearly. The graphics are switchable between the AMD Radeon HD 6630M and the Intel HD Graphics 3000 processors and there’s a simplified way to control how much power is being drained by every application you happen to be running through the Configure Switchable Graphics option. Pity all of the thoroughly adjustable graphics features are not accompanied by good audio quality though. 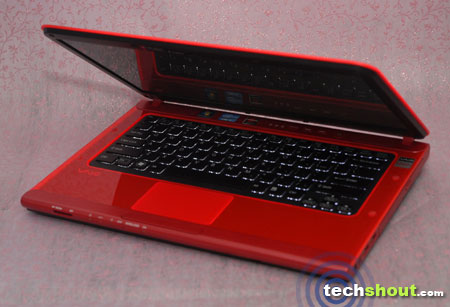 Checking out the productivity angle

The Sony Vaio C unit we received arrived pre-loaded with the 64-bit Microsoft Windows 7 Home Premium OS and a VGP-BPS26A Li-ion rechargeable battery. The latter can go on for 3 to 3.5 hours before sending you into panic mode with regards to discovering a free wall outlet to draw more juice from. If you think about productivity from the internationally accepted unofficial standard, how many e-mails you can type out on a portable PC may be the key reckoner. The keys on the keyboard are spaced well apart and react with a firm dip. The numeric keypad has been sacrificed and the touchpad could have been larger, but at the same time, it’s not likely to make you feel you’re suffering.

A 2.3GHz Intel Core i5-2410M processor works away at the heart of the Sony Vaio C Series to push out a decently lag-free performance. The CPU Speed Professional software we tested it with awarded it a CPU speed score 2,362MHz at an average. We also got a 500GB hard drive for hoarding files and 4GB of RAM. Evernote, Vaio Gate, ArcSoft Webcam suite accompanying the HD camera on the bezel, Office Starter, McAfee and Norton Online Backup surface among the software packages that are bundled into the system. 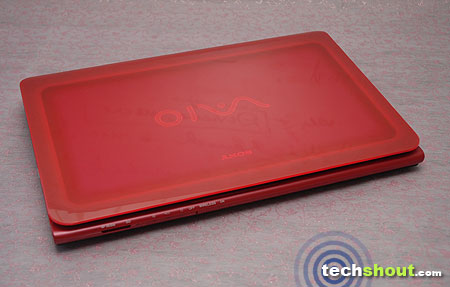 On the other odds and oddments

The heat emitting vents seem to be doing their job in a reasonably efficient manner as compared to the other notebooks we’ve pressed through our review process. It turns pleasantly toasty around the touchpad and air vent portions only after over 3.5 hours of usage. In terms of portability, dimensions measuring 341mm x 27.9mm to 36.2mm x 235.2mm and a 2.4kg weight don’t exactly fall light in the shoulder bag or carrying case. For the most part of it, the Sony Vaio C is just your ordinary laptop trying (and possibly succeeding, depending on the beholder) to look fashionable. 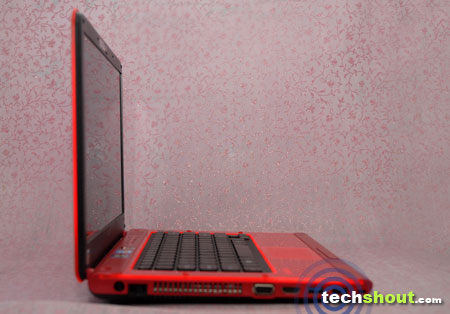 We like the keyboard on this Sony offeirng. It delivers a firm dip and keeps your eardrums free of any clickety clackety sounds.

Sluggish is not a word you’d associate with the laptop. It can handle multi-tasking pretty well and we found no lag in performance even when we opened several applications at the same time.

We do realize that it’s each one to his own when people talk about design. The Vaio C series may define itself by the way it looks. Blame it on our aesthetic sense, but we’d be hard put to call the notebook a looker on any account.

The battery life leaves us aching for more. Around 3.5 hours of juice for average usage is just inadequate for any kind of computing device aspiring to be placed in the portable category.

We wish Sony had paid more attention to the sound quality on the laptop. They may as well do away with the speakers for what it’s worth.

Carrying a price tag of approximately Rs. 55,990, the Sony Vaio C series does not give us reasons to declare our undying affection for it over other notebooks. Or maybe we’re hard to please. At any rate, it’s a steady performer with more USB ports than you’d need on an ordinary day, a decent enough display resolution and an optical disc drive among other key features which could color it attractive to a potential buyer. It ought to feel happy about the 8.5 out of 10 rating we’re giving it.