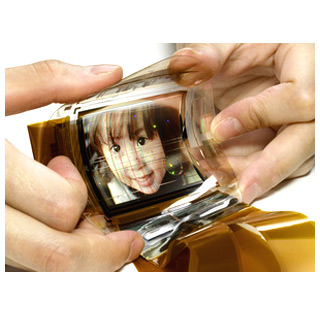 Thin is in. No we are not referring to Kate Moss, but to the ever-increasing number of thin gizmos in the market. From mobile phones to flat-panel TVs to media players, all companies are in the race of developing the sleekest and chicest device. And here’s one more following the bandwagon.

Sony has developed a razor-thin display that measure merely 2.5 inches and bends like paper while showing full-colour video. In the midst of super-slim flat-panel TVs, a display that’s so thin it bends in a human hand is indeed ultra innovative.

Sony has released a video of the new uber-thin display, in which a hand squeezes a display that is 0.3 millimeters, or 0.01 inch, thick. The display exhibits colour images of a bicyclist stuntman and a picturesque lake.

Sony is yet in the works of finalizing on commercial products incorporating the technology.

“In the future, it could get wrapped around a lamppost or a person’s wrist, even worn as clothing.” Adding, “Perhaps it can be put up like wallpaper,” said Sony spokesperson Chisato Kitsukawa.

However according to Tatsuo Mori, an engineering and computer science professor at Nagoya University, a few hurdles yet remained, such as making the display bigger, ensuring durability and cutting costs, to name a few.

But he said the display’s pliancy is extremely difficult to replicate with liquid crystal displays and plasma display panels, the two main display technologies now available in the market.

“To come up with a flexible screen at that image quality is groundbreaking,” Mori said. “You can drop it, and it won’t break because it’s as thin as paper.”

Several other biggies, including LG and Epson, are also working on a different kind of “electronic paper” technology, however Sony said the organic electroluminescent display delivers better colour images and is more apt for video.

Sony President Ryoji Chubachi has said a film-like display is a major technology his company is working on to boost its status as a technological powerhouse.

Last year, during a meeting with journos, Chubachi boasted Sony was working on a technology for displays so ultra thin it could be rolled up like paper. He had predicted the world would stand up and take notice.

However a few analysts have noted that Sony, had fallen behind competitors in flat-panel technology, including Samsung Electronics Co. of South Korea and Sharp Corp. of Japan.

All the same, Sony has been marking a spin under Chubachi and chief executive Howard Stringer, the first foreigner to head Sony, by reducing jobs, shuttering unprofitable businesses and strengthening its flat TV offerings.