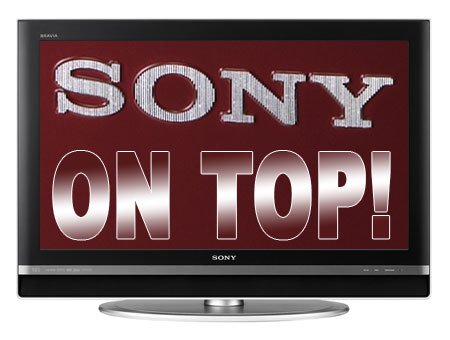 Sony produces one of the best ranges of consumer electronics. From the time the company introduced their lineup of televisions, they have been admired for the amazing quality offered. But Sony was late to arrive at the LCD TV party, which has been dominated by the likes of Samsung, Vizio and Sharp.

They had a very slow start in 2007 as it was behind schedule to offer fully-digital LCD TVs. But the recent Christmas proved to be a very nice one for the electronics giant. A study done by Texas-based research firm DisplaySearch indicates that Sony topped the list of the North American LCD TV shipments. They were bumped four places from the earlier quarter to take a 12.8 percent share in the October-December period.

The figures from DisplaySearch suggest that Samsung is behind Sony as it has a 12.3 percent share. It exchanged places with Vizio who had a share of 10.7 percent. Vizio was second and Samsung was third with figures similar to the former in the third quarter. Besides these three, the list of the top five is completed by Sharp and Polaroid respectively.

When you see the list for North American plasma televisions shipments, Panasonic and Samsung take the top spot. The others who made it to the top five in the plasma TV lists for the October-December period are LG, Hitachi and Philips respectively. In the overall list for flat panel televisions, Samsung takes the honor with Sony, Vizio, LG and Sharp following it respectively.

By and large it seems that Sony did have a good Christmas as their next generation video game console, the PlayStation 3 also gave positive figures. Samsung has been doing well in the last decade not only in the North American region but also in India, mainly because of their prices. LG too has been coming up with great results, but their products have not been as great as those from other top electronic firms.